The mother of all stupidity continues unabated 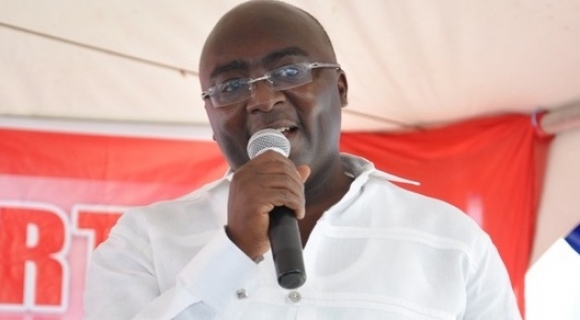 I never thought I will have to express my disgust in a familiar tone like the above title again. The first time I used it, the rendition was, ‘This is the mother of all stupidity’. It is a caption I gave to an article written about four years ago to capture my sentiments at that time. In the piece, I lamented over the economic consequences of increasing the number of parliamentary seats and district councils when the country’s economy was in dire straits.

My appeal and a lot of people who spoke against it was not heeded, and the current government went ahead to implement the recommendation of the electoral commission further inflating our national debt. I can hear a revolting, as well as, childish rebuttal that President Kufuor did a similar thing. Be that as it may, you will think that a government that went ahead to implement such imbecility in the face of protest will learn from the indefensibility of where they place their priority.

Dr Bawumia, as usual, has come under heavy criticism for exposing the unmitigated rot at the heart of the transfer of a quarter of a billion dollar Eurobonds into a private bank. He has been called many names by the very people who will benefit from this insane financial trickery. AduAsare, a presidential staffer, even said that Dr Bawumia is exposing himself to unemployment, because no banking institution will employ him for his habit of divulging private information into the public domain. This beggars the imagination, but I don’t have the time and space to deal with this congenital loquacity.

Many have already laboured strenuously to prove the silliness of this government transaction with the UBA bank. For a detailed number crunching analysis, those interested should go and read the one done by Theo Acheampong on ghanaweb. The following is the link:Philip KobinaBaidoo Jnr http://www.ghanaweb.com/GhanaHomePage/features/The-US-250m-Ghana-Infrastructure-Investment-Fund-and-matters-arising-438177. The apologists of this financial quackery are using sleight of hand to bamboozle the uninformed. One, so called, financial analyst, who is also an NDC parliamentary aspirant, has been jumping all over the place like an agitated molecule bombarding heaven and earth to sing his master’s tune. The legality of the transaction can be debated till thy kingdom come, though the government claims it’s within its legal purview.

Last Saturday on Newsfile, the premier Joy News current affairs programme, the above mentioned financial analyst, Isaac Adongo, tried to explain it away with complicated financial jargons, which is meant to throw dust in the eyes of the average Ghanaian Newsfile viewer. He was of the opinion that the government deposit at the UBA can be recalled at any time and UBA are under legal obligation to make the funds available. Who will be so silly to believe these trained professional? This is a government that has perfected the act of deception that even their own founder, Jerry John Rawlings, was able to mount a bulldozer during his time in office to fool the people of Keta that their sea defence project was under way. I want some self-loathing to tell me that Philip you are wrong. This is the obvious question that any concerned Ghanaian should ask. What is the guarantee that if UBA had used the money to buy government treasury bills they will not put the project, which the money is meant for, on hold till the maturity date of the treasury bill?

Let’s forget the above arrangement and go strictly according to normal banking procedure. In banking, for those who lack the knowledge, there is a standard practice call fractional reserve banking. Let’s assume that UBA has capitalisation of $500 million dollars from depositors. With fractional reserve banking they are allowed to loan out two thirds of their capital, which will amount to $333.33 million. If they do any other, then the Bank of Ghana is not doing its supervisory job. The bottom line is that they can only make profit on the latter figure. However, with the government depositing $250 million their capitalisation will increase to $750 million, which means they are now at liberty to loan out $500 million to profit from.

The question that Mr Adongo will have to answer truthfully is whether UBA buys government treasury bills. It is inconceivable that they will act differently from other commercial banks in the country. However, if they do, then the inevitable conclusion is that they are using the $250 million to loan back the government.

Mr Adongo actually alluded to the fact that the money was transferred in cedis. Besides, the governor of Bank of Ghana has actually vouched that the money was taken in cedis. The question is why do you change your dollars into a currency that inflation is in the high teens. Does it make any sense to any astute financial mind? We are dealing here with a government that is in debt. If it has surplus and it decides to invest it, even in any low yielding investment, it will be worthwhile. Depositing the $250 million in UBA will not yield more than what UBA will get from using the same funds to buy treasury bills, because they are supposed to make profit from the transaction. Meaning the government loses out whichever way. This deal is meant for the party to have a kickback from UBA in order to finance their campaign. If they claim that is not the case, then we have a bunch of lunatics governing the country, or they believe in the magic of diluting milk with water in order to have more of it. God save Ghana from these group of incompetent ruffians holding the country to ransom.

If what the government has done is pursued in the private sector it will be seen by forensic financial auditors as fraud. Let’s assume a company has an undistributed profit, and decides to loan to itself that money at high interest rate. This neat trick will reduce the future declared profit of the company, which enables it to pay lower tax on their operations. So if a private company cannot be allowed to do this why should the government be allowed to cook their books in such a blatant financial sleight of hand? Parliament should follow the trail of papers and wire to every niggling detail to expose these people for what they are, unless they also decide to take part in the booty. The government will have to publish how much profit they made out of the loan to UBA and what UBA accrued from buying the government treasury bills. Anything short is admission of guilt, because the $250 million is public money that the tax payer will have to pay back. It will be paid by ordinary people sweating under the sun to pay their taxes.