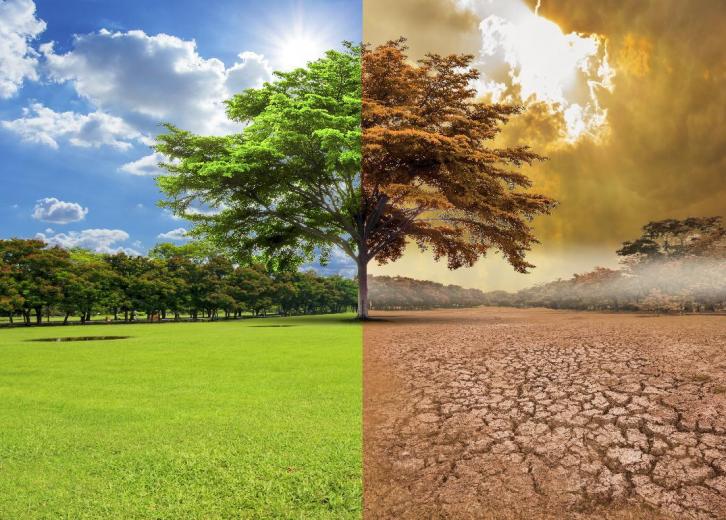 It is hard to imagine more devastating effects of climate change than the fires that have been raging in California, Oregon, and Washington, or the procession of hurricanes that have approached – and, at times, ravaged – the Gulf Coast.

There have also been deadly heat waves in India, Pakistan, and Europe, and devastating flooding in Southeast Asia. But there is far worse ahead, with one risk, in particular, so great that it alone threatens humanity itself: the rapid depletion of Arctic sea ice.

Recalling an Alfred Hitchcock movie, this climate “bomb” – which, at a certain point, could more than double the rate of global warming – has a timer that is being watched with growing anxiety. Each September, the extent of Arctic sea ice reaches its lowest level, before the lengthening darkness and falling temperatures cause it to begin to expand again. At this point, scientists compare its extent to previous years.

The results should frighten us all. This year, measurements from the National Snow and Ice Data Center in Boulder, Colorado show that there is less ice in the middle of the Arctic than ever before, and just-published research shows that winter sea ice in the Arctic’s Bering Sea hit its lowest level in 5,500 years in 2018 and 2019.

Over the entire Arctic, sea ice reached its second-lowest extent ever on September 15. Amounts vary from year to year, but the trend is inexorably downward: the 14 Septembers with the least sea ice have all been in the last 14 years.

But sea ice is not only covering less area; it is also thinner than ever. The oldest sea ice (more than four years old), which is more resistant to melting, now comprises less than 1% of all sea ice cover. First-year ice now dominates, leaving the sea cover more fragile and quicker to melt. Scientists now expect the Arctic Ocean could be almost ice-free in late summer within a decade or two.

The effects would be catastrophic. In the extreme scenario, which could happen within decades, loss of all ice during the entirety of the sunlit months would produce global radiative heating equivalent to adding one trillion tons of carbon dioxide to the atmosphere. To put this in perspective, in the 270 years since the Industrial Revolution began, 2.4 trillion tons of CO2 have been added to the atmosphere.

About 30% of the Arctic warming has already been added to the climate because of the ice lost between 1979 and 2016, and more warming follows quickly as more of the remaining ice is lost.

This extreme scenario would drive climate change forward by 25 years, and it is hardly farfetched. Just last month, a block of ice about twice the size of Manhattan broke off from the largest remaining Arctic ice shelf, in Northeast Greenland, after record summer temperatures.

Meanwhile, on land, the Greenland Ice Sheet is also in peril. With Arctic warming occurring at least twice as fast as average global warming, Greenland’s rate of melting has at least tripled over the last two decades. It is believed that this will become irreversible in a decade or less. Eventually, this melting will cause sea levels to rise by up to seven meters (23 feet), drowning coastal cities, though this peak will most likely not be reached for hundreds of years.

Compounding the problem of accelerating Arctic warming is the self-reinforcing feedback risk of permafrost thawing. With about twice as much carbon locked away in permafrost as is already in the atmosphere, releasing even some of it could be disastrous. Permafrost thawing would also release even more potent greenhouse gases: nitrous oxide and methane. As global temperatures rise, it also is possible that even more methane could be emitted from the East Siberian Arctic Shelf’s shallow seabed.

Clearly, urgent action is needed to mitigate these tremendous – even existential – risks. Rapidly reducing CO2 emissions is necessary, but not nearly sufficient. In fact, studies show that even rapid cuts in CO2 would mitigate only about 0.1-0.3°C of CO2 warming by 2050.

That is why it is also vital to slash emissions of so-called short-lived climate pollutants: methane, black carbon, hydrofluorocarbons (HFCs), and tropospheric ozone. Such action could mitigate six times as much warming as reductions in CO2 emissions by 2050. Overall, eliminating emissions of these super pollutants would halve the rate of overall global warming, and reduce projected Arctic warming by two-thirds.

Some progress is being made. Almost four years ago, in Kigali, Rwanda, 197 countries adopted an amendment to the Montreal Protocol focused on phasing out HFCs. (Already, the Montreal Protocol has facilitated the phase-out of nearly 100 chemicals that fuel global warming and endanger the ozone layer.)

Moreover, in the United States, the Senate reached a bipartisan deal last month to cut the production and importation of HFCs by 85% by 2036. California, for its part, has slashed black carbon emissions by 90% since the 1960s, and will halve the remainder by 2030. And the US Climate Alliance – a bipartisan group of 25 state governors – has set the goal of reducing methane emissions by 40-50% by 2030.

These are laudable goals. But reaching them – let alone the more ambitious targets needed to stem the rise in global temperature – will require us to overcome strong headwinds, beginning with US President Donald Trump’s administration, which opposes emissions-reduction targets.

Even if Trump loses next month’s election, the Arctic – and the entire planet – will be in grave danger unless the new administration radically strengthens efforts to cut emissions of both CO2 and short-lived climate pollutants. People all over the world are already losing their homes and livelihoods to deadly fires, floods, storms, and other disasters. Far worse could be yet to come.

Eric Posner, professor at the University of Chicago, is the author, most recently, of The Demagogue’s Playbook: The Battle for American Democracy from the Founders to Trump.