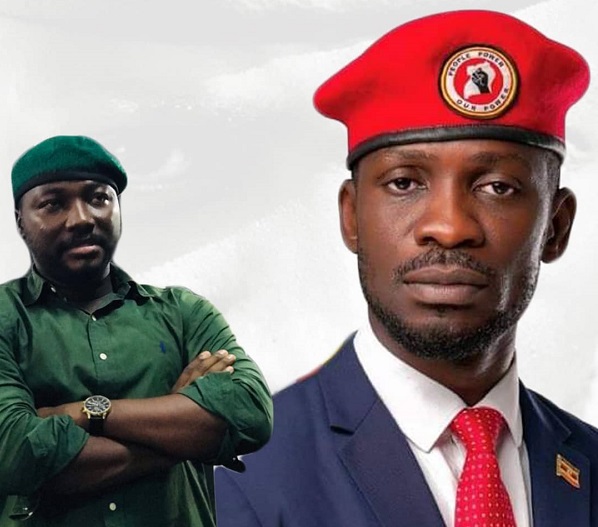 Fraternal greetings from our Ancestors Marcus Mosiah Garvey, Osagyefo Dr Kwame Nkrumah, His Imperial Majesty Emperor Hailey Sellassie and the many others who have lost their lives in the resistance struggle.

I write with a heavy heart to you my brother in the struggle, Comrade Robert Kyagulanyi (BOBI WINE)

Let me begin my letter by in the voice of Osagyefo Dr Kwame Nkrumah that "The forces that unite us are intrinsic and greater than the superimposed influences that keep us apart.

Comrade, you have come a long way in your quest for a better Uganda for the people of Uganda. I have keenly monitored your progress in the resistance struggle from your day-to-day Campaign programs line up to offer your words of hope, freedom and prosperity.

Your campaign has seen worse of attacks such as road blocks, detentions, arrest and killing of your key elements, threats to press freedom (journalists) and many others I have lost count.

Unfortunately, Africa, where we both belong, political office holders celebrate their successes by counting the number of sacrilegious acts, disdain for human rights, selective application of law, instead of showing real developmental achievements.

Rather, hypocrisy, sycophancy, and arrogance has taken the center stage of our political architecture.

But can corn get justice in a court composed of cocks?

We bestowed on ourselves an Enterprise called Democracy, which was not by mere chance, considering the very circumstances that found its way into our political architecture, ideally to bring ease, fundamental human rights (rights to vote, own properties, join association of choice, protest, demonstrate, press freedom, peace) social protection and various forms of freedom.

You Bobi, all Africans like Ugandans and Ghanaians have the moral right and civic responsibility to protect, guard and promote the sanctity and integrity of our hard-won democracy bestowed on us by the blood and toil of our fathers.

Comrade Wine, I leave you with once a great country called Uganda, to do everything possible in you might to bring hope, peace freedom and prosperity to your countrymen from the shackles of a wrecked dictator and despot Yoweri Kaguta Museveni for the past 33 years of sorrow, massive corruption, abuse of power and so on.... which continues to be worse day in and day out, and you have a responsibility to correct and right the wrongs in Uganda.

As I write the dictator Museveni is up with his games again, using the Military and Security Apparatus causing fear and panic in and around the capital of Kampala, these are intimidating tactics and I will urge you and your men to remain Vigilant, the word is "vigilant “before, during and after the elections.

To my fellow Ugandans,
"The great Revolutions in the history of man, past, present and future, is the revolution of those determined to be free."
(John F Kennedy) " you have once again an opportunity to determine the next face of your destiny, remain vigilant, focused and resilient, I say this because the imperialist is very closer than we think, and stress you must resist any form of intimidation from the oppressor because we the oppressed must not give them a breathing space until we are free and our votes must be counted.

And now, may the spirit of our fallen heroes and progressives give you guidance and light as you thread on the path of restoring dignity to your people.

A vote for Bobi Wine is true freedom for all Ugandans.

Yours in the Resistance,