What at all is wrong with Accra Hearts of Oak? 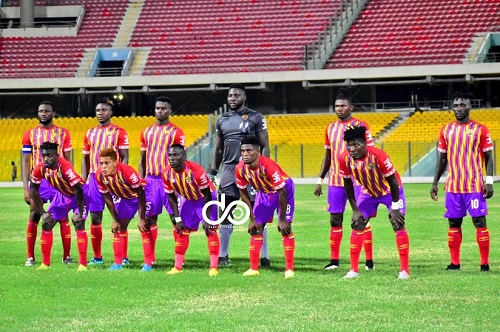 The loop wishes to crave your indulgence to join the ongoing debate on the happenings in Accra Hearts of Oak to help rescue the oak tree from being uprooted by visionless and faceless individuals.

At age 109, every ardent football follower in Ghana and beyond especially a dyed- in -the- wool supporter of Hearts is anticipating a massive improvement in the management of the club that could bring back more successes and stability to the club.

Undoubtedly, there is so much pressure in the club due to poor outputs of the playing body and other peripheral activities the club needed to resolve to help sustain and maintain a certain level of success.

I stand to be corrected. I believe the major problem bedevilling Hearts of Oak over the years is basically poor communication, selfishness, lack of competent officers and poor information management.

There seems to be a total   lack of effective communication between management and players, on one hand, management and  supporters{stakeholders) on the other hand.

A seemingly Lack of understanding between past administrators and the current administration is the core of Hearts problem.

It's very significant for both past and current handlers of the club to find a convergence point to deliberate on critical matters bordering on the forward march of the club and not their individual interests which over the years kept the club in doldrums and stagnation.

The poor internal and external communication network system of the club has directly affected every single aspect of the club's administration leading to consistent and endless internal wranglings.

If I may ask: what is the relationship between all past administrators of the club and the current administration led by Togbe Afede?

How can you run a club with such a massive following and succeed with a divided front?

Undoubtedly, there is a huge lacuna between the past and current top echelon of the club who are supposed to do the right thing for the benefit of the club. The external interferences in the administration of Togbe Afede is said to be unprecedented in the history of the club.

I often find it hard to comprehend the teaming supporters of Hearts of Oak when they complain about the current majority shareholder and the President of the club. All you hear them say is, Togbe Afede has destroyed their club and that he should handover the club to them and wash his hands off. Unfortunately, most of these people used the media to attacked their club President and called him names.

I just wonder where were these people when Accra Hearts Oak floated shares and invited all and sundry to come and patronize and eventually Togbe Afede bought enough shares and emerged as the majority shareholder.

You need to chronicle event of Hearts of Oak before the year 2000, in 2000 and what led the club to the introduced floatation of shares and juxtapose your variables to the current happenings in the club to make effective deductions.

You don't need a rocket economic scientist to tell you how Togbe Afede has kept the club he cherished afloat regardless of the incessant pressure from within and without.

Never try to use Togbe Afede as a sacrificial lamb because there are individuals who think they are better than him and it's about time they take over the running of the club from him.

It's appropriate to tell all those people to immediately go and purchase more shares of the club and overtake the majority shareholder so they can compete with him on who should run the show at Hearts of Oak as it were.

It's very clear that there was not enough education and sensitization for the teaming fans to understand the dynamics of the new order in comparison to the old order where there was no check and balances regarding finances.

In 2000, Hearts of Oak won the FA Cup, Ghana premier league and for the first time in their history the CAF Champions League and CAF Confederation cups respectively.

In that same year of 2000, Hearts was ranked 8th club in the world when the club dominated most of the continent sporting(football) activity.

It's thus prudent to say that until members of the Oaktree develop cool heads, close their ranks and stop the unnecessary bickering and attacks on the club's President, they will eventually send their darling club to relegation and destroy all their gains. Real Tamale United is there for them to advise themselves.

It's also important supporters of the club stop comparing the current administration with the past administration. Please, the dynamics are not the same. All Togbe Afede is doing at the moment is to protect your club, your investments(shareholders) and his investment in the club over the years.

The late Alhaji Braimah Suleman aka Alhaji Hearts made it abundantly clear in 2017 when similar friction was visited upon the club. He lamented on the effects of the shares floatation of the club and complained bitterly that the floatation of shares has done more harm than good to the club. I disagree with him though. Because he never explained in details why he thought so.

Alhaji Hearts of blessed memory is no more but I think he has offered a workable antidote to the Phobia family to utilize and help resolve their internal and external problems within the spirit of unity and stability.

I was personally excited when the Hearts Pobiman project took the center stage in the club's agenda because, in modern football, infrastructure is the heartbeats of a serious club who intend to achieve laurels on and off the pitch.

I believe somewhere in June 2020, Togbe Afede was reported to have said that the Pobiman project secured GHC4.5 million loan from GT Bank. He further went on to passionately said that the club is ready to float shares for the fans to show their support for the club and have targeted raising GHC40million in the next share floating.

Reports have it that the Club's President urged Phobians to patronize the shares floating to show their support and commitment to the growth of the club. This is where competition is needed from every single supporter of Hearts to help raise money to cater for players and club officers as well as pay back the loans meant for infrastructure development of the club.

"This floatation of shares will enhance the clubs financial status and that will help the club to compete with the elite clubs on the continent".said Togbe Afede

I believe the narrative of Alhaji Hearts provided Hearts of Oak supporters the awareness to calm down and find a common ground to solve their problems because Hearts is bigger than all of them including Togbe Afede.

Togbe Afede in his submission I believe provided the needed information Hearts fans want to hear to appreciate how his administration is working tirelessly to restore dignity, integrity peace, unity and tranquillity in the club.

The unending bickering in Accra Hearts of Oak is caused by the faceless individuals who think they can use the playing body and some club officials to frustrate managers(Coaches)and management. These tactics are obsolete.

Until past and present Hearts officials meet to resolve their own issues, players take a second look at their commitments to the club and uninformed club fans who frequently used both the traditional and social media to destroy their own club President desist from doing so, nothing will change in Hearts.

The media is also not helping matters at all. The media seems to often time create a storm in a teacup with just a  little misunderstanding in the club.

As a key stakeholder in the football industry, journalists are expected to write and report on matters of relevance to help enhance the beauty and efficacy of the game in all aspects.

A businessman like Togbe Afede should be supported to help raise the standard of Accra Hearts of Oak but not to destroy him because of some faceless, selfish and unproductive individuals who may not have purchased any shares to help the situations in the club.

In the past, people admired and later converted to the Hearts fraternity due to their popular motto "Never say die until the bones are rotten".But it looks like the Phobians are gradually rendering the spirit of that enviable motto ineffective.

Collectivism is always better than individualism