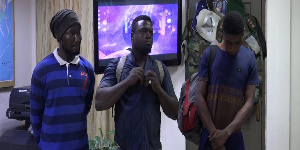 The three Nigerian stowaways who landed in Ghana instead of Spain are currently going through processes to be repatriated.

In an interview with Citi FM the Tema Port Security Manager, Colonel Joseph Punamani said the three men are being processed and will be repatriated soon.

" When we get them what we do with them is that we hand over to the police and immigration, they are treated as refugees, they will be repatriated, so they are not under arrest but will be processed and repatriate them.."

Three Nigerian Stowaways, Isaac Daniel 32, Stephen Nuta 28 and Kelvin Popoola 26, were reported to have sneaked on board the vessel MV Unity from Apapa Port of Nigeria, with the conviction that the vessel was heading towards Spain.

Unfortunately, the vessel was heading towards Ghana to discharge some general goods at the Port of Tema where the suspects were seen hiding in a small space behind the vesselâ€™s propeller( fan).

The suspects had in their possession alcoholic beverage, provisions and a hammer.

According to the suspects, they outsmarted workers on the vessel and were hoping to seek greener pastures in Europe.

According to security officials, one of the suspects, Isaac Daniels, was arrested in 2019 for a similar offense and deported to Nigeria with some 600 dollars package.

Tema Port Security Manager, Col Punamane said the issue of stowaways being disembarked at the Tema Port is becoming a major concern and wants measures to be put in place to ensure the act of stowaway doesnâ€™t become attractive to the youth.