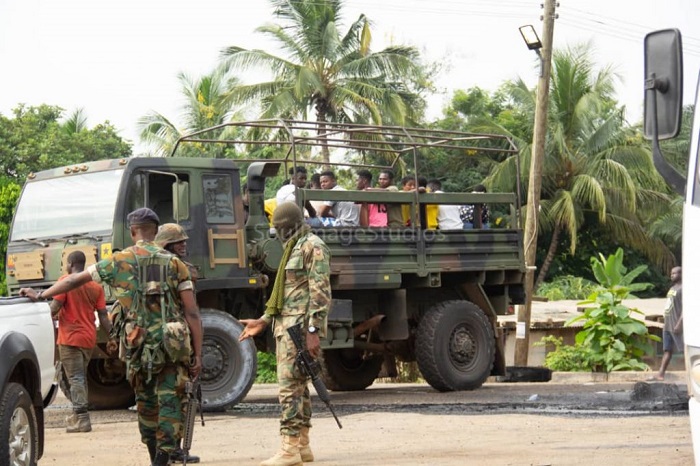 Some thirty-one people believed to be members of the Western Togoland group have been hit with five charges by state prosecutors at an Accra Circuit court.

They are in the custody of the Bureau of National Investigations as their pleas were not taken as state prosecutor ASP Sylvester Asare informed the court the state wants them remanded into custody to aid investigations.

Theophilus Donkor, lawyer for the accused persons made an application for bail but this was rejected by the court.

They are to re-appear in court on October 13.

The lawyer insists that these thirty-one individuals are not part of the secessionist group and these were individuals who were only at the riot scene when the police and the military conducted the operation.

Armed men demanding the secession of Western Togoland from Ghana blockaded major entry points to the Volta region of on Friday morning.

They held three police officers hostage, including a District Commander, and attacked two police stations. Prior to the blockade, the group reportedly broke into an armory and stole weapons.

About 12 hours before Friday's dawn operation, the Western Togoland Restoration Front (WTRF) published photos of the graduation ceremony for around 500 personnel who underwent training for months in secret locations, raising questions over the effectiveness of security agencies in the region.

A previous unsuccessful attempt to declare Western Togoland independent from Ghana took place in 2017. In March 2020, around 80 members of the separatist group were detained for protesting the arrest of seven leaders of the Homeland Study Group Foundation. The charges were later dropped.

The police and the military in a joint operation rounded up some of these people and are currently facing trial.