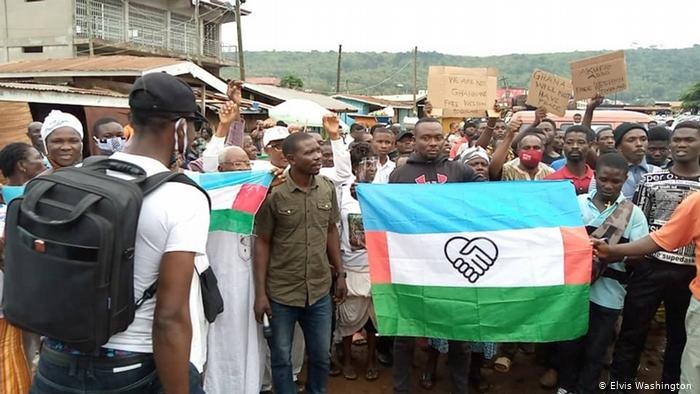 The Chiefs and people Gbui-Hohoe, Alavanyo and Anlo traditional area have jointly condemned the disturbances by the Western Togoland group in the Volta Region.

The Chiefs who have dissociated themselves from the recent protest have urged security agencies to deal ruthlessly with everyone involved.

Addressing the media Chief of Gbui, Togbui Agyema V says they are not in support of the activities of the Western Togoland group.

"We the elders and the entire citizenry within the Gbui traditional area condemn in no uncertain terms the activities of these group. We do not condone these act of illegality and vandalism been perpetuated by these group. Gbui-Hohoe since independence has been part of Ghana and we have lived in peace and harmony with other regions. It is unfortunate that a group of people with their selfish agenda want to disturb the peace and harmony prevailing in the Volta Region and Ghana. We will soon go to the polls, we call on the government and the security agencies to prevent these group of people to enter our traditional area".

Armed men demanding the secession of Western Togoland from Ghana blockaded major entry points to the Volta region of on Friday morning.

They held three police officers hostage, including a District Commander, and attacked two police stations. Prior to the blockade, the group reportedly broke into an armory and stole weapons.

About 12 hours before Friday's dawn operation, the Western Togoland Restoration Front (WTRF) published photos of the graduation ceremony for around 500 personnel who underwent training for months in secret locations, raising questions over the effectiveness of security agencies in the region.

A previous unsuccessful attempt to declare Western Togoland independent from Ghana took place in 2017. In March 2020, around 80 members of the separatist group were detained for protesting the arrest of seven leaders of the Homeland Study Group Foundation. The charges were later dropped.