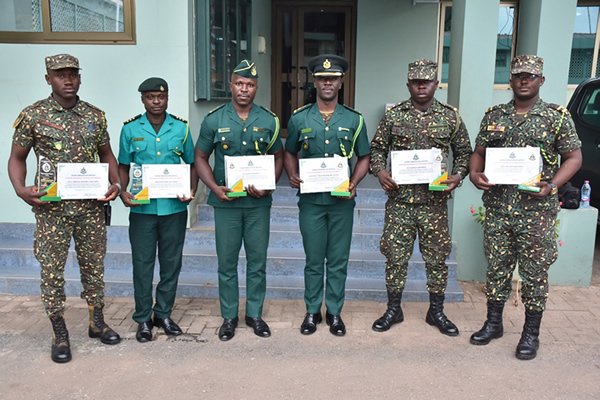 The Officers in a group photograph with the Comptroller-General of Immigration, Kwame Asuah Takyi and his Deputies.
Shares

Some six immigration officers have been honoured for rejecting ₵25k bribe from smugglers.

The six were honoured by the Comptroller-General of Immigration (CGI), Kwame Asuah Takyi on Wednesday, August 21, 2019, at a staff durbar at the National Headquarters in Accra for their dedication to duty.

On August 1, 2019, the six intercepted 1,950 bags of NPK Fertilizers meant for the Planting for Food and Jobs programme at Fielmon, an unapproved route, at the Ghana – Burkina Faso border in the Upper West Region.

They declined an inducement offer of GH¢25,000 offered by the smugglers.

The CGI presenting the awards to the six officers commended them for acting swiftly to the call of the informant and for refusing to be enticed with money.

He said this was a mark of integrity especially when the needs of man were endless and resources were increasingly scarce. 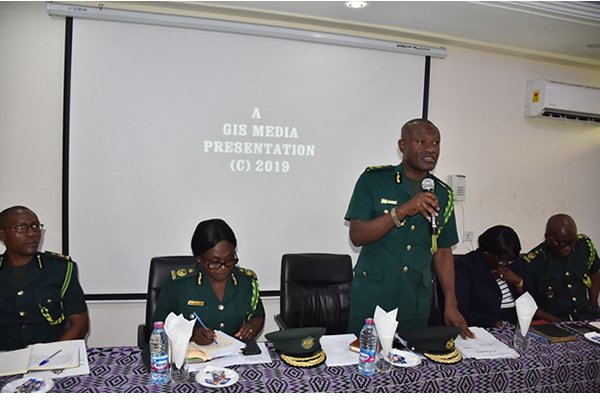 “It speaks well of you to have rejected such huge sum of money, GH¢25,000.00, despite your own economic challenges,” he noted.

Mr Asuah Takyi added: “You have placed the interest of the nation first, and this shows a high sense of patriotism and I encourage all Officers to emulate this good deed.”

He explained that the certificates and plaques were being given to them for posterity sake.
“It is not just a paper but something your children will look on and be proud of you,” he said.

The CGI reassured the Officers at the durbar that they would soon bear arms to enable them to confront border crimes with the needed ruthlessness.