67% of Ghanaians are aware of the Dec. 17 referendum - ILGS survey 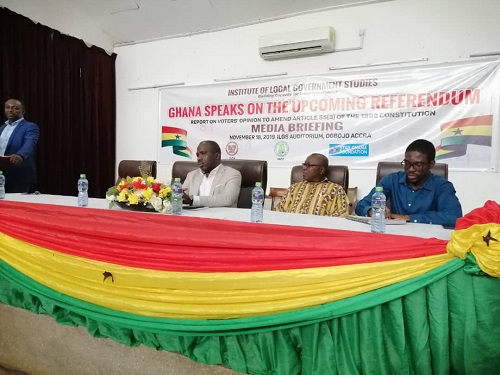 67% of Ghanaians are aware of the Dec. 17 referendum - ILGS survey
Shares

A survey by the Institute of Local Government Studies (ILGS) has indicated that 67% of Ghanaians are aware of the upcoming December 17 Referendum.

The December 17 Referendum is targetted at amending Article 55(3) of the 1992 constitution.

Ghanaians will vote in the referendum to decide whether an entrenched clause in the 1992 Constitution (Article 55(3)) needs to be amended to pave way for political parties in Ghana to participate in the organization of local government elections coming December 17 2019.

According to the ILGS, the amendment if passed in the referendum is likely to be a game-changer. This will trigger a new form of democratic decentralisation and end the country's six decades of nominal devolution and shift accountability of political leadership from the centre to the grassroots and enhance greater citizen participation inclusive democratic Governance and development.

The survey indicated that 6550 out of 16,845,364 registered voters from 6 metropolises, 18 municipalities and 20 districts (totalling 44 MMDs) across the 16 regions were interviewed taking the total national voters population into consideration.

The regions with the highest citizens awareness about the referendum are North East (83%) and Central (77%) while the lowest is Eastern (53%) and Ashanti (57%).

Speaking at a media briefing in Accra, the Director of Local Government Institute, Dr Nicholas Awortwi , said : ''the survey, which was conducted across 44 MMDAs in the 16 regions had the Institute's personnel interview 6,550 registered voters on their stance regarding the December 17 referendum. 67% of the people interviewed responded in affirmative to vote, 18% said they will not turn up while the remaining 15% are yet to decide''.

''Among the 67% of affirmative respondents that will turn out to vote in the referendum, 75% indicated that they will vote “YES”, 12% said “NO” and 13% refused to disclose their voting preference,'' he added.

He further indicated that :''the rationale for us to conduct this is because there is an evidence that Ghanaians want their MCEs and DCEs elected but they are split in terms of whrther that should be done through political party systems because of what the Yes and No campaigns arguments made''.

This result he said shows a lot of hope for YES campaigners with 4 weeks to go.

Dr Nicholas Awortwi, however, indicated that the study was completed a day before the NDC officially declared its preference for a No Vote and the National House of Chiefs also later issuing a statement calling for a rejection of the proposed amendment.

READ ALSO:Nat’l House of Chiefs calls on Ghanaians to vote 'No' in December referendum