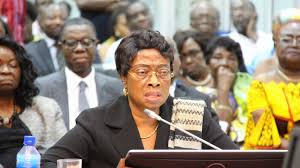 The Chief Justice, Ms Justice Sophia Akuffo, has instructed the closure of the Adjaben District Court 2, near the Ghana Cocoa Board (COCOBOD) Head Office in Accra Central.

According to her, the building does not provide a sound environment for justice delivery. Adding that the building posed a health and environmental threat and, has directed the Judicial Secretary to start the process which would formally lead to the closure of the court.

The court was constructed with asbestos, a heat-resistant material which is harmful to humans. Its fibre, when inhaled, can lead to serious health conditions such as mesothelioma, a type of cancer that affects the lung, heart and abdomen.

The Chief Justice gave the directive yesterday when she visited the two Adjaben District courts as part of her tour of courts in some parts of Accra.

She chastised the Accra Metropolitan Assembly (AMA), which used to have jurisdiction over the area, and the Korley Klottey Municipal Assembly, the new assembly in charge of the area, for allowing the building to stand all these years.

The Chief Justice stated that: “People should not have operated from this building and I am surprised the assembly allowed it to happen. If this building is not pulled down, I will sue the assembly as a private individual for not providing a safe working environment for people.”

The Korley Klottey Municipal Chief Executive (MCE), Nii Adjei Tawiah, promised the Chief Justice that the assembly would look for temporary premises for the court, while it worked towards putting up a new court building.

This is not the first time Justice Akuffo has closed a court which is not conducive for justice delivery.In March this year, she ordered the closure of the Accra Central District Court Complex, which contained eight courts, due to the dilapidated nature of the building.

Under the Local Governance Act, 2016 (Act 936), metropolitan, municipal and district assemblies (MMDAs) are required to provide and maintain court buildings in their localities.

Failure by the assemblies to do that, she said, would force her to close down what she described as ‘abominable’ court buildings.

“We will close down courts that are in abominable buildings''.

''The Judiciary will not continue to accept horrible working environments,’’ she said when she recently swore in newly appointed magistrates in Accra.