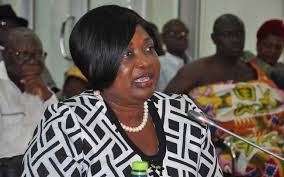 She will hold this position until a substantive Special Prosecutor is appointed.

Her appointment follows the resignation of Mr Martin Amidu, three years after his appointment.

Cynthia Naa Torshie Lamptey is a Ghanaian lawyer and a public servant.

She graduated from the Ghana School of Law, and She was employed as a state attorney at the Attorney-General's Department in 1995.

She served as the Director of Public Prosecutions under the John Dramani Mahama administration.

Madam Cynthia Lamptey handled the criminal prosecution of Alfred Agbesi Woyome and other high profile criminal cases including; the case of the alleged stealing 86.9 million cedis by an Executive Director of the National Service Scheme and the prosecution of two Ghanaian women who had played a leading role in the exportation of cocaine to the United Kingdom in 2014.

Cynthia Lamptey after 20 years of service to the nation, she left the department in 2015 and she was replaced by Yvonne Attakorah Obuobisa.

In January 2018, she was named the Deputy to the Special Prosecutor Martin Amidu as Ghana.