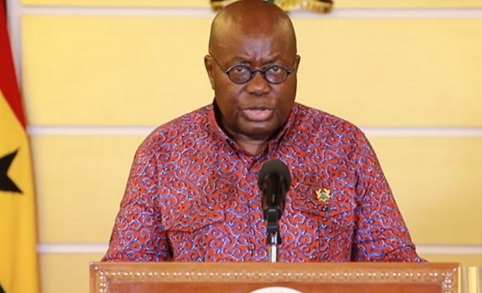 President Akuffo-Addo has ruled out a reshuffle of his ministers anytime soon.

The president said he is on a daily basis appraised with the performance of his ministers to determine whether they are delivering.

When asked if there will be a reshuffle anytime soon in an interview with North Star radio in Tamale, he said "I don't have any strong reasons to head the call."

"Several of the people who are responsible for assisting me to steer the country out of the difficulties that we inherited and out of the difficulties that have subsequently come are still in place and many of them for me have done an outstanding work. Their output is been considerable and that's what I look at."
"it is a daily preoccupation for I'm required on a daily basis to ask myself whether the output of particular ministers are up to the mark. I am of the final authority and if they are not up to the mark, I'm required to act. But if their output measures the expectations, then I don't have any strong reasons to head the call."

The subject of reshuffle has been high on the political front burner with some calling on the president to eject some new energy and dynamism into his administration.
The President also believes calls for a reshuffle sometimes have ulterior motives.

“The calls come for all kinds of reasons; NDC wanting to destabilise the government is one. There are people who are also looking for jobs.”
Akufo-Addo has begun a two-day tour of the Northern Region from Monday, August 8 to Wednesday (10) as he will be inspecting some projects in the Region.

The President is expected to pay a courtesy call on the King of Dagbon, Ndan Yaa-naa Abukari II, at the Gbewa Palace and subsequently cut sod for a dual carriage Eastern Corridor road in the Yendi township as well as inspect the work on the Yendi Sports Stadium.

After that, the President will then proceed to Saboba to inspect Agenda 111 project.

On Day Two, President Akufo-Addo will visit Kpandai to inspect New Administrative block and Agenda 111 project after which he will then move back to Bimbilla to cut sod for a dual carriage Eastern Corridor road in the Bimbilla township and inspect a 1D1F project.

He will also commission a new administration block at Bimbilla College of Education.

On the final day of the tour, President Akufo-Addo will inspect work on a new Presidential Lodge Complex at the Northern Regional Cordinating Council.