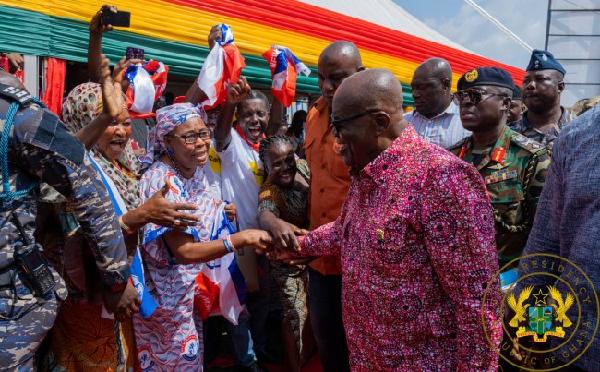 President Akufo-Addo says his works in the Ashanti Region will soon put his detractors to shame.

The President who was speaking during the sod cutting ceremony for the construction of the Suame Interchange on Tuesday said, his administration has been committed to the development of the Ashanti Region and all parts of the country.

“All those who have been saying bad things about me would be shamed today, tomorrow and tomorrow’s next”, he stated in the local Twi parlance.

Acknowledging the current difficulties of the country currently, the president said, “Inspite of the current challenges confronting the country which I know will be over soon, I continue to be excited about the prospects ahead. And I urge all to join hands to build the Ghana we want”.

Touching on the construction of the 4-tier interchange, the president stressed that work will be completed on schedule and that the contractor has been admonished to ensure movement of commuters is not hindered.

“Apart from this project, Government is tackling critical road projects throughout the country in a holistic manner, so that every part of Ghana shall have quality, all-weather roads.”

“In the Ashanti Region alone, the Akufo-Addo Government has completed asphalt overlay of two hundred and ninety-five kilometres (295kms) of roads since 2017.

The President has been under fire following his comments relating to demands from residents of the Kwabre East Constituency for their road to fixed, but speaking just a day after the controversy, President Nana Akufo-Addo said the government is committed to providing good roads for Ghanaians.