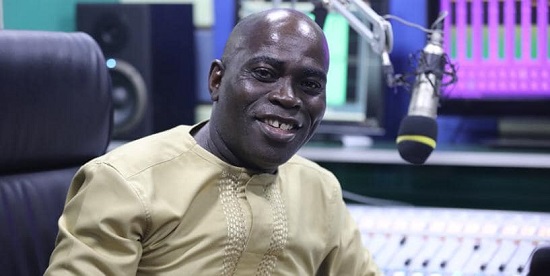 Daniel Adjei Peprah popularly known as Nana Adjei Sikapa, a member of  Despite Media Group, Peace FM has passed on.

According to reports, Nana Adjei Sikapa who in the past hosted shows such as Wo gyedie ne s3n and Wo bu b3 a me te b3 has been sick for some time.

The number rises to two of persons who the Despite Media Group have lost this month.

Earlier this month the sudden death of presenter Kwadwo Annor Wiafe was announced. Wiafe who was the host of Neat FM’s drive time show, passed away on Thursday, June 4, 2020.

He attended Nerebehi R/C and progressed to Nyinahin L/A Primary.

After his elementary school, he went to Nyinahin L/A Middle which he successfully passed the Middle School Leavers Certificate Extermination and got admission to the Atebubu Training College in 1987-1991 where he completed a four year certificate programme in Education.

As a professional teacher, he taught both in Atwima Agogo and Abuakwa R/C Primary School for several years.

However, due to his rich cultural exploits and love for poems, he started with YENA Krokron through which he had an invitation to be on Garden Citi Radio in Kumasi as a guest, where he got privileged to host varieties of shows with the biggest at the time being the morning show host which he excelled to the toast of his listeners.

READ ALSO: Persons who fail to wear face mask could be jailed for 10 years - Oppong Nkrumah

From there, one could say the heavens poured on him divine favours.

In 2003, the famous and affluent Dr. Osei Kwame Despite invited Nana Adjei Sikapa to work with his numerous skilled and talented newscasters. He really established himself by his famous appellation style of radio presentation which was unique.

Akokra Nana was married to Madam Theresa Amankwa and was blessed with six children.