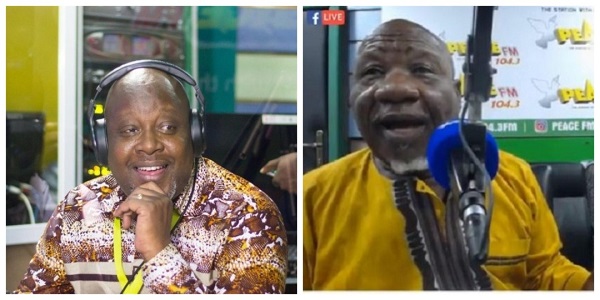 Host of Peace FM's Kokroko show, Kwami Sefa-Kayi, has vowed to maintain Allotey Jacobs as a panel member on his show.

Allotey Jacobs a former National Democratic Congress (NDC) Chairman in the Central Region is a regular panel member for the Wednesday show and always represents his party.

He appears on the show with Abdul Malik Kweku Baako Jnr, editor in chief of the New Crusading Guide, Kwamena Duncan, Central regional minister and another NDC representative.

However recent comments and turn of events have seen him been stripped off the opportunity of representing the party on the show due to what the NDC describes as comments against the party and a 'sell-out'.

This was followed by a formal letter from the NDC to Peace Fm, withdrawing NDC participation on the Kokroko show until the former Central regional Chairman is dropped from the show.

Sefa-Kayi says he can't grant the wish of the NDC and drop Allotey Jacobs from the show.

â€œThis is a man commuting from Cape Coast to Accra in odd hours just to take part in my show, I canâ€™t drop him,â€ he told DGN Online.

The NDC in a statement said:Â â€œThe National Communication Bureau of the National Democratic Congress (NDC) wishes to inform all its communicators, media monitors, and officials that the party has boycotted Peace (104.3) FMâ€™s morning show (Kookrokoo) effective today, Wednesday, 6th May 2020,â€ Sammy Gyamfi, said in a statement

The NDC in a letter on May 6, 2020, announced it had suspended Allotey Jacobs from the party due to his persistent anti-party conduct.