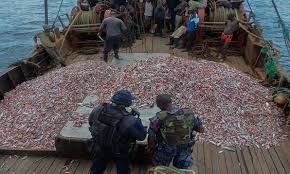 The Marine Police Unit has impounded a canoe loaded with ice fish which were catch illegally on the shores of Apam in the Gomoa West District of the Central Region.

Three suspects are currently in the police custody of the Apam Police assisting in their investigations.

The illegal practice is popularly known as "Saiko fish".

Saiko is the practice where fishermen use fishing vessels that are unauthorized and under sized nets to catch small fishes.

They then arranged through their agents for canoe fishermen to buy the fish on the sea.

A member of the Fisheries Enforcement Unit of the Marine Police, Corporal Agyemang Opambour explained that, two security men and the owner of the fish have been arrested after 250 of parcels of ice fish was found in a canoe at Apam sea shore.

According to him, they made arrest and handed them to Apam Police for further investigations.

Corporal Agyemang Opambour explained that the practice is against the fisheries regulations.

He said the practice has also contributed largely to the poor catch phenomenon.

“We want to assure all Ghanaians this case will go court for prosecution”, he added.