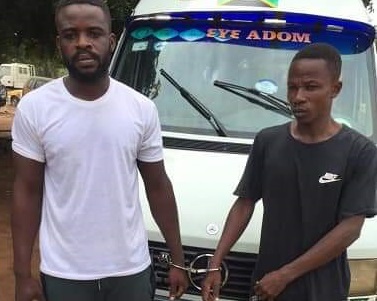 Francis Buabeng, the Trotro diver who was captured in a video together with his mate allegedly assaulting a police constable Julius Mawuli Ekpe says he did that in self-defence.

At the Accra Weija Circuit Court on July 6, 2019, Buabeng claimed that the policeman has assaulted him and his mate and that they had fought back after being subjected to unjustified attack.

Buabeng narrating the incident said the policeman tried to forcibly take possession of the keys of his vehicle from him but he resisted.

That was when I got the opportunity to come out of the car to defend myself. At the time, he was wearing a helmet and so he gave me a head butt, which caused my lips to hurt and ooze with blood,” he said.

He pleaded with the court to discharge him because what he did was in self-defence.

Background
According to the police situational report, at Weija a driver seen in the video with his mate beating the officer stopped in the middle of the road to wait for some passengers.

These actions by the driver caused heavy traffic on the road and in the process, a motorbike ran into the rear of a private car.

Then the police officer who has been assaulted went there to help the situation, the driver nearly hit him with the vehicle and sped off, the officer then took an Okada and followed them.

After catching up with them, the police officer requested that the driver follow him to the Police station and that resulted in the attack on him by the driver and his mate.

The report also added that after the confrontations, the driver and his mate abandoned the vehicle and went away.

The police managed to tow the vehicle to Odorkor police station. The driver and his mate were later picked up.