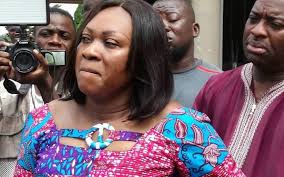 The incumbent Member of Parliament for Awutu Senya East, Mavis Hawa Koomson has denied being behind the shooting incident that happened at the Steps to Christ polling station on Monday, December 7, 2020.

Two people have sustained gunshot wounds at the Church of Christ Polling station at Kasoa in the Awutu Senya East constituency in the Central region.

Reports indicated that the perpetrators of the crime were in a Black Toyota Land Cruiser who opened fire on a Kia Salon car that was driving out of the polling station.

Reacting to the incident, the MP for Awutu Senya East said the people just want to create problems for her and never did she step out from her house after voting.

“After casting my vote I went back home because I knew the Lord was fighting that battle for us. This battle was not won on a silver platter, it was not easy spiritually or physically but at the end of the day, I was the winner, I have won once again. History has been made again. My initial target was to win by 9,000 votes and although I did not reach it I still won.”

“Yesterday you heard a lot of rumours, people thought they could use those rumours to win the seat. Like I mentioned earlier, I didn’t go out yesterday but I got the information that people said they saw me outside with a gun and I shot someone so some of my people did not even come out to vote and some of my other supporters did not vote for me because of the rumour but I still managed to win,” she added