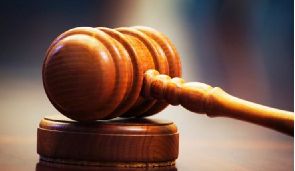 A 38-year-old banker has been put before an Accra Circuit Court for allegedly stealing GH ¢11,000 cedis from a deceased customer’s accounts.

The accused, Kwabena Adu Gyamfi, however, pleaded not guilty and he has been admitted to bail in the sum of GH¢15,000 cedis with three sureties one to be justified.

According to him, it was the late Nana Adu Gyamfi Kwamaning III who asked him to transfer GH¢6,000 cedis to one Sarah Sosu, now at large and himself (accused) GH¢ 5,000 cedis.

He further claims Nana Kwamaning III, who died last year had since come for the GH¢ 5,000 cedis from him.

Gyamfi is to reappear on January 19, 2017, before the court presided over by Ms Eva Bannerman Williams.

Below are the facts of the case as reported by graphic.com

Chief Inspector Agbemahia said the accused person was with Customer Life Circle Management, a department of the bank branch at Knusford, Accra.

On October 24, this year, the relatives of the customer known as Nana Adu Gyamfi Kwamaning III went to the Oda branch of the bank and presented letters of Administration to enable the relations of the deceased to access funds in the decease's account.

It was realised that even though the customer passed on last year, there had been transfer of GH 6,000 cedis and GH¢5,000 respectively on June 2, this year and June 14, this year.

The matter, according to the prosecutor was referred to the Forensic Unit of the bank for investigations and it came to light that the accused person transferred the various amounts to one Sarah Sosu, a customer of the bank"s branch at Airport on June 2, this year and accused person’s personal account at the Abossey Okai branch.

Chief Inspector Agbemahia said the complainant after concluding his investigations reported the matter to the Fraud Unit of the Criminal Investigations Department.

During interrogation, Gyamfi denied the offense and said that it was the deceased who came to the bank on June 2, this year and June 14, this year and asked him to do the transfer for him (the accused) and Sarah.

According to Gyamfi, the deceased had since come for GH¢5,000 cedis from him.

The prosecution said the accused failed to prove that it was the deceased who personally ordered the transfer and investigations revealed that Sarah Sosu, who received GH¢ 6,000 cedis was Gyamfi’s cousin.