Some brutalities on Ghanaian Journalists in recent times 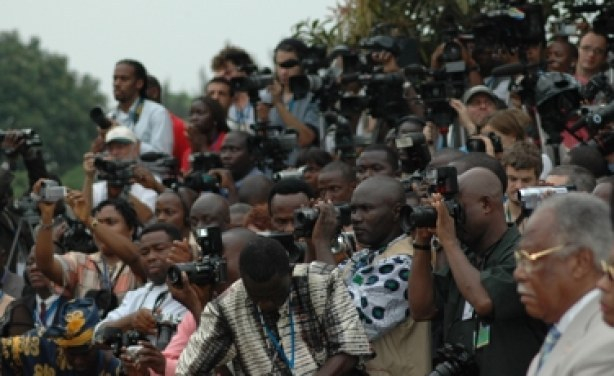 Media practitioners (journalists) have been subjected to severe brutalities in Ghana with a number of them sustaining various degrees of injuries.

The media which is the fourth estate of the realm has been faced with many challenges in executing their duties as the watchdog of society.

Journalists provide citizens with the information they need to make the best possible decisions about their lives, their communities, and their societies. Most practitioners in both Ghana and around the world end up assaulted, particularly in their line of duty.

Some Journalists in media houses in Ghana who have been brutalized in the past years are Ebenezer Kwame Abaka of TV3, Victor Kwawukume Daily Graphic, Ohemaa Sakyiwaa Ahwenepa of Adom FM, Journalists from Ghanaian Times among others.

In the case of the Western Regional correspondent of TV3, Ebenezer Kwame Abaka, he was heckled by a military man who seized his camera in the process at an event he was invited to cover.

The journalist had gone to cover the passing out parade of some recruits of the Ghana Air Force at the Air Force Base in the Western regional capital, Takoradi.

Some of the attacks have left journalists with serious medical conditions. Daily Graphic’s Victor Kwawukume lost his sense of smell as a result of being beaten by some Police officers while on assignment to cover a swoop on criminals.

Adom FM journalist, Ohemaa Sakyiwaa Ahwenepa was assaulted by a New Patriotic Party (NPP) activist Hajia Fati at the party headquarters in May 2018.

Haji Fati allegedly punched the lips of the radio presenter and slapped her for attempting to take a shot of her.

The journalist, Sakyiwaa stated that the assault happened after Hajia Fati, tried to deny the suspended Second Vice Chairman of the party, Sammy Crabbe to pick up a form to contest for the Chairmanship position.

Three journalists from the Ghanaian Times newspaper on their way for the day’s assignment were assaulted by about ten police officers at Kinbu in Accra Central in  March 2019.

The assault followed a traffic offence and an accident involving a police officer who was using an unregistered motorcycle and the official Ghanaian Times vehicle, which was conveying the journalists to their various assignment venues.

The journalists trying to record the accident and also the ensuing exchanges between their driver and the police motor rider were pounced on and assaulted physically by the police officer.

In an interview with the Head of News of Radio Ghana in Ghana Broadcasting Corporation(GBC), Teye Kitcher told PrimeNewsGhana that  the police service needs to review its code of ethics to curb indiscipline in the police service

''The police is losing its credibility in the media and population at large.The police need to review its code of conduct and make the public aware of consequences when flouted to curb indiscipline in the Police Service.Also, some policemen feel once they are in uniform they are above the law and that civilians do not have the right to question them over certain issues.The Police service needs to rethink, re-educate its people and check people they recruit into the service''.

The Journalist also added that people in Public office need to comport themselves and that being in position does not make them all- powerful. He also said great leaders are tolerant, patient and listen to the citizenry.

According to him,''Most people in authority most often than not will like to protect their image.If there is an issue and as a journalist want information to report on, you should have decent approaches when interviewing people.Journalists must not portray arrogance in approaching issues and that they should be humble in approaching people to obtain desired information and prevent been brutalized  ''.

''The GJA should not just talk in issuing statements.The GJA should help victims assaulted to sue perpetrators of assault in court'',he added.