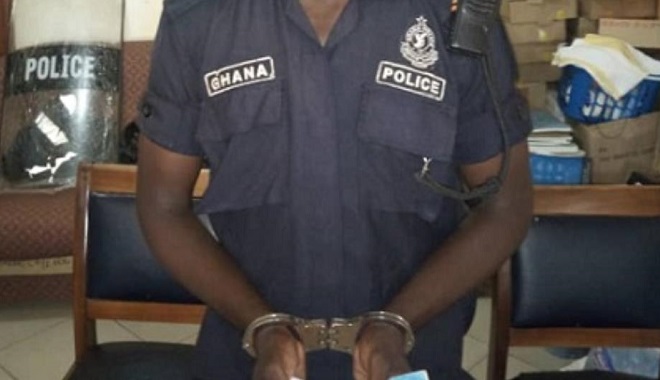 A Police Officer has been arrested for allegedly robbing and killing a Taxi driver in Central Regional capital Cape Coast.

30-year-old Lance Corporal Bright Akonsah who is with the Regional CID and attached to the Formed Police Unit is said to have led two other accomplices to rob the taxi, kill the driver and attempted to sell the car.

"When the Lance Corporal got to the spot he directed the Taxi Driver to stop the vehicle and then shot him twice once the driver was behind the steering wheel. Suspect Ebenezer Tetteh who was hiding in the bushes nearby pulled the deceased Taxi driver and the police officer shot him again to make sure he is dead. The two suspects after the act set off with the Vehicle to Cape Coast to sell at a price of Eight Thousand Ghana Cedis to the third suspect, all three suspects have been remanded into police custody and are assisting with investigations, no office who commits crime will be spared".

In a related development, a Police officer in North East Region has been interdicted by the Police Administration.

This comes after inspector Felix Beckley was arrested for assisting a robbery suspect to acquire an illegal firearm.

Preliminary investigation into the case showed that the inspector used his position as a police officer to facilitate the licensing of a pump-action gun found in the possession of the robbery suspect Adam Musah, while the gun was still in the custody of the police.

The Ghana Police Service has warned it's personnel that they will not be shield should they commit criminal acts.