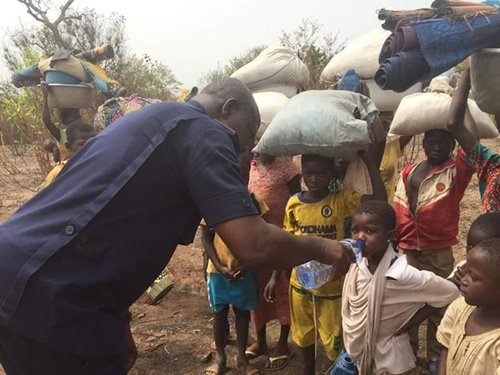 The National Disaster Management Organization (NADMO) has set up temporary camps to house women and children forced to flee the raging conflict between the Konkombas and Chokosis in the Chereponi District.

The current figure of displaced persons stands at 2,600 and Police have sent reinforcement to the area which has become volatile.

NADMO earlier said they could not reach out to those displaced by the conflict due to the intensity of the situation but have been able to do so now.

Deputy Director of NADMO Mr. Seji Saji says they have set up temporary camps to house the displaced persons but have not been able to reach all the affected persons.

"We have not been able to reach all persons yet, especially in Chereponi it is difficult reaching all the affected because we do not have a camp to house them"

Meanwhile, the Konkomba Youth Association in Accra has called on the government to intervene and halt the conflict before it escalates.

The outbreak of violence is the second in the past three months as Chereponi residents opened the New Year with old violence.

The armed struggle is over ownership of land believed to be nothing more than two acres but with ancestral significance.

The Konkombas, who are one of the largest ethnic groups in the North, until recently, did not have a paramount chieftaincy institution.

The attacks and reprisals between the Konkombas and Chokosis (also Chakosi) have been going on since the colonial times.  A security report said a group of Chokosis attacked Konkombas last Sunday at Puloti village in the Chereponi district.