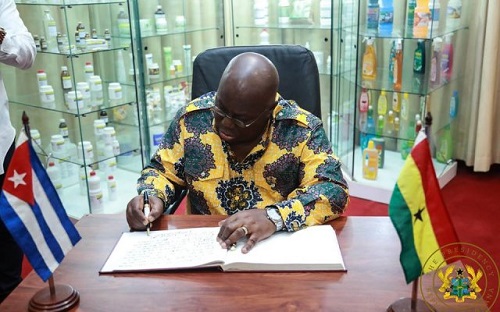 President Akufo-Addo says the cooperation between Ghana and Cuba will be extended to the eradication of Malaria through a joint venture agreement with Labiofam S.A.

This he says will result in the establishment of a bio-larvicide factory in Savelugu, in the Northern Region of Ghana.

The President said this in Cuba on Thursday, 4 April 2019 when he visited the two companies; Labiofam S.A., and Stella Chocolate Factory S.A.

President Akufo-Addo also disclosed that an agreement is also being reached for the sale of Ghana’s cocoa liquor to the Stella S.A. chocolate factory in Cuba, and his government wants to examine the possibility of Stella S.A. establishing a manufacturing facility in Ghana.

The President is on a tour and arrived in Havana on Wednesday, 3 April 2019 from the U.S.A. where he delivered a lecture at the Institute of Politics, University of Chicago, met with Rahm Emanuel, a former Chief of Staff to President Barack Obama and currently the Mayor of Chicago and interacted with members of the Ghanaian community resident in Worcester, Massachusetts.

The President delivered a speech at the Harvard Kennedy School of Government, at Harvard University, Boston, the United States of America on March 29, 2019, urged leaders in Africa to use the enormous wealth the continent is endowed with to develop and empower their respective youth populations.

He also discussed investment opportunities in Ghana at the Chicago Council on Global Affairs.

President Akufo-Addo will return to Ghana on Saturday, 6th April 2019.