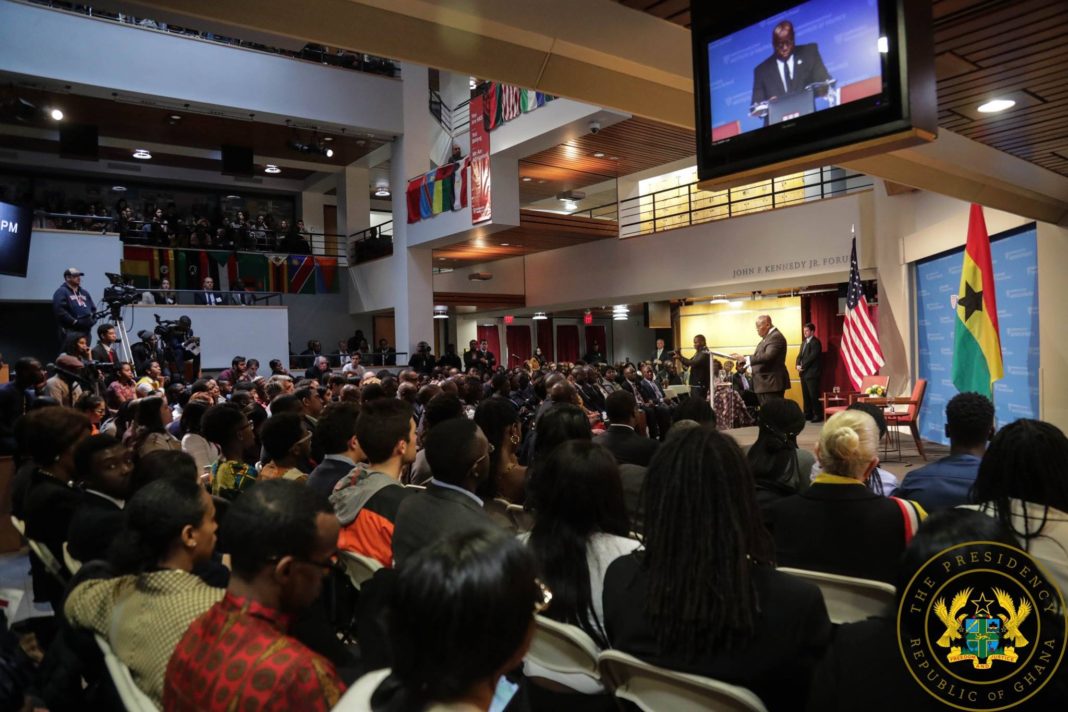 The President of the Republic, Nana Addo Dankwa Akufo-Addo, has urged leaders in Africa to use the enormous wealth the continent is endowed with to develop and empower their respective youth populations.

With Africa possessing the largest generation of young people in history, President Akufo-Addo indicated that “I place great hope in their capacity to shape the future of Africa and make Africa the lion that it was meant to be.”

PHOTOS: A closer look at Prez. Akufo-Addo as he turns 75 today

Prez. Akufo-Addo defends the number of Ministers in his gov't

President Akufo-Addo made this known on Friday, 29th March 2019, when he delivered a speech at the Harvard Kennedy School of Government, at Harvard University, Boston, United States of America, on the theme “Empowering the Youth, Africa’s Golden Future.

To realise the demographic dividend, African countries, he stressed, have to invest in the empowerment, education and employment of young people.

“No one needs to tell us that mass unemployment in Africa, especially amongst her youth, is a ticking time bomb. The so-called Arab Spring showed clearly that lack of employment opportunities can undermine social cohesion and political stability. With between 10 to 12 million youths joining the labour market every year, Africa has to pay maximum attention to job creation,” Akufo-Addo added.

With young people willing to risk everything to improve their circumstances, the President noted that increasing investment in young people is key, including promoting quality education that prepares them for a future of opportunities.

“That is why the Free Senior High School policy, instituted by my government two years ago, which is expanding dramatically access to secondary school education for all of Ghana’s young people, is opening up greater and greater vistas of opportunities for Ghana’s young female population. Legislation is on its way to redefine basic education to encompass kindergarten up to the end of senior high school, and make it compulsory for all of Ghana’s children,” he said.

Describing the 21st century as the century of science and technology, the President noted that the mastery of digital technology by African youth must be the compelling challenge for them if, indeed, they are to survive in this competitive, technological environment.

Additionally, with several economies on the continent dependent on the production and export of raw materials, President Akufo-Addo noted that there is no way these economies can produce wealth and prosperity for their peoples, especially their youth, explaining that “it is time we were responsible for processing our own resources. It is time that we, in Africa, manage our resources well, to generate wealth for our populations.”

President Akufo-Addo also advocated for the involvement of young people in decisions that affect them, explaining that Africa cannot talk about shaping the future without talking about the welfare and wellbeing of young people.

“It is important that Africa takes these ideas forward to harness the value of a youthful population, holding human rights, gender equality, development of human capital, and dignity at the centre of all our investments. Only by providing opportunities that open the future to all young people do we create a brighter future,” the President added.

Whilst stressing that Africa does not have a DNA that dooms her to failure, Africans, the President added, can, like all the other peoples that have succeeded, make life meaningful and worth living for their own people.

“There is an abundance of dynamic, entrepreneurial talent on our continent struggling to express itself and take advantage of such conditions. We have to encourage this expression with full force and ensure that we can stand on our own feet, and make it impossible for the systematic looting and plundering of our human and material resources, that have characterized much of our modern history, to continue. This is the significance of the concept of Ghana Beyond Aid, indeed, of Africa Beyond Aid,” President Akufo-Addo added.