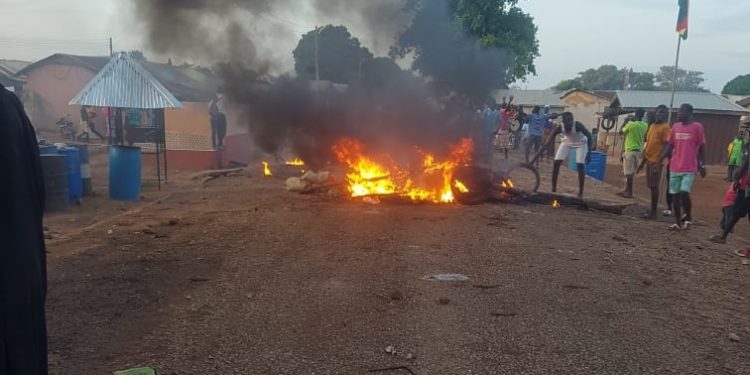 The Municipal Chief Executive (MCE) of Bimbilla in the North East Region, Abdulai Yaqoub says a Municipal Security Council (MUNSEC)  meeting is ongoing over clashes during the Damba festival celebration in the area.

Three persons have sustained injuries in Bimbilla during a stampede after police fired warning shots to disperse a charged crowd.

The crowd were members of the late Nakpa Naa’s family and had been served notice by the Nanumba North District Security council not to celebrate the Damba festival this year.

The incident occurred yesterday evening after police attempted to prevent the Nakpa Naa’s family from celebrating the festival in his palace in defiance of a court order.

The family members confronted the police allegedly burning tyres and throwing stones at the officers who in turn fired rubber bullets and used water cannons in dispersing the crowd.

Speaking on Starr FM today, the Municipal Chief executive of the area, Abdulai Yaqoub describing the situation indicated that the reason for calling on security was to ensure the order given was followed to maintain peace.

''Three people have been injured one has been discharged, the other transferred to the Tamale teaching hospital and one is still on admission at the Bimbilla Hospital. The decision is that we were given clear instruction after the supreme court verdict that Nakpa Naa’s family have not got the right to drum, dance and do other things and this was a directive we were enforcing. MUNSEC is holding a meeting to resolve the matter.''

He further indicated that security enforcement had been put in place to ensure that, the right person celebrates the Damba peacefully.

The MCE added that necessary preparations are underway for the legitimate regent, Nyelinboligu Naa Yakubu Andani Dassana II to celebrate the festival.

Abdulai Yaqoub also stated that they are also prepared and are already converging for the celebration in the evening.