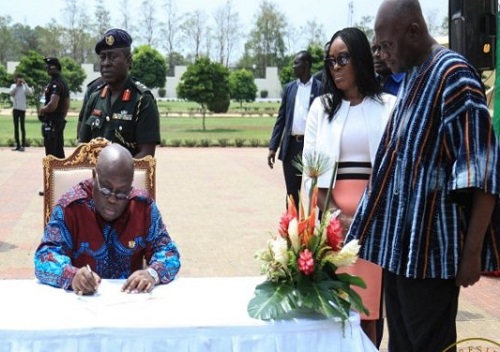 The president Akufo-Addo has declared Damongo as the regional capital for the newly created Savannah region.

Announcing the decision at the Jubilee house this evening, the president charged the Northern regional minister, Alhaji Salifu Saeed to act as the senior messenger for the area until a substantive minister is appointed.

The President earlier in the day declared Nalerigu as the capital of the new North East region.

In line with Article 5(8) of the 1992 Constitution, President Akufo-Addo today February 12, 2019 held the first of a series of ceremonies at the Jubilee House in Accra to issue a constitutional instrument to the creation of two new regions.

Damongo is a town and the capital of West Gonja district, a district in the Savannah Region of northern Ghana.

It hosts the overlord of the Gonja Kingdom; the Yagbonwura and it is also the capital, biggest town, in the Damongo Constituency which is represented in Parliament by Adam Mutawakilu.

Damongo boasts of key tourist attractions like the Mole National Park where visitors are assured of seeing a myriad of animals chief among which being elephants.

It also houses the popular tourist site of Larabanga Mosque and Mystic Stone in Larabanga with all the ancient stories surrounding their onset.

Some of the prominent personalities who were either born in or come from Damongo include the former president, John Dramani Mahama; Second Deputy Speaker of Parliament, Alban Bagbin; former Defence/Health Minister; Benjamin Kunbuor and the former Presidential candidate of Conventions People’s Party (CPP), Michael Abu Sakara Foster.