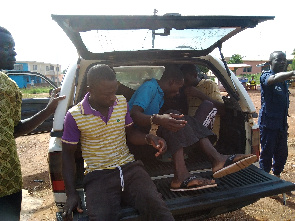 Eight out of the 10 persons arrested after a failed takeover of the Kintampo waterfalls have been remanded into prison custody by a District Magistrate Court in Sunyani.

They are to reappear before the court presided over His Worship Fred Obikyere on 25th April 2019.

The eight persons were arrested at Kintampo during a clash between the Mo Youth and joint Police-Military reinforcement team after they were unsuccessful in their quest to take-over the Kintampo waterfalls.

They were charged with conspiracy to commit a crime to wit and rioting with offensive weapons. The eight persons included Stephen Busi, Anthony Kwabena Owusu aka Free Boy, Samuel Nyarko, Emmanuel Nkrumah and Kwabena Winsah.

Kumah was granted bail based on health grounds, as he is currently receiving treatment for gunshot wounds while Ruben is believed to be a minor.

Presenting the facts of the incident, the Legal Officer for the Ghana Police, Chief Superintendent Emmanuel Akonnor said on Tuesday, 16th April 2019, they received information that a group of young men believed to be members of the Mo Youth Association who were holding guns, clubs, cutlasses, and other offensive weapons numbering about forty had gone to chase out the officials at the waterfalls.

He said Nimoh Michael, Kwadwo Kumah, Kwaku Acheampong Ruben and Sumaila Ayuba aka Mallam Azonto were also arrested when they besieged the police station with others who had come with offensive weapons including guns, clubs, cutlasses, and stones.

He said the youth blocked the road leading to the Divisional Police Headquarters, they however quickly called for reinforcement of military and police from Techiman and Nkoransa.

One person was shot and killed. He said WO II Charles Opoku was also stabbed with a knife in the process.