Elephants on rampage in C/R: Cocoa farmers angered by their destruction 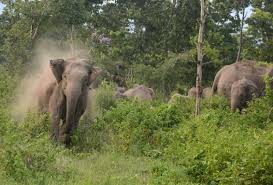 Some farmers at Assin Serebuorkrom and Assin Aboabo Camp in the Assin South District of the Central Region are complaining bitterly about the destruction of their cocoa farms by some rampaging elephants.

According to the aggrieved farmers, the elephants which come from the Kakum National Park move about from time destroying their farms.

Speaking in an interview with Joy News, the farmers stated that in order to protect their farms, they sometimes have risk their lives by confronting the animals with sticks.

Registering their displeasure with the situation, the farmers threatened to damn the consequences and gun down the animals if nothing was done concerning their plight.

"We are not going to sit down for the animals to destroy our farms. If government does not intervene, we will fight with the Game and Wildlife people and kill the elephants to protect our", one of them stated.

Another alleged that "the Game and Wildlife people have refused to compensate us because according to them, the elephants were in the forest before our farms".