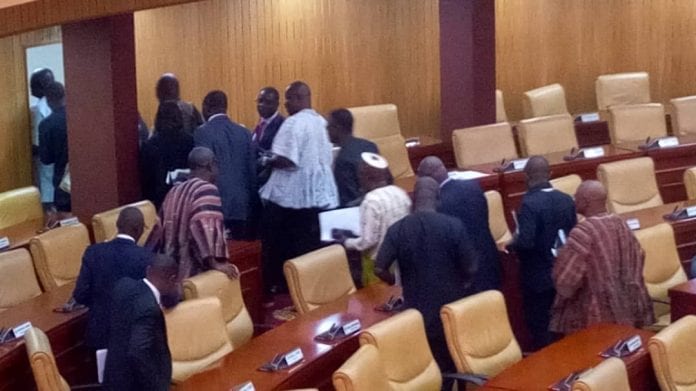 Programmes Manager for Parliamentary Network Africa, Gilbert Boyefio says there is a possibility of more walkouts by Members of Parliament this electioneering year.

According to him, Members of Parliament are taking entrenched positions on issues which is affecting Ghana's democracy. He added that MPs are not ready to come to a consensus and agree on issues debated in Parliament.

His comments come afterÂ Minority in Parliament today February 25, 2020, stayed away from debating the content of President Akufo-Addoâ€™s state of the nation address delivered last week.

Â Speaking on Starr FM today, Mr Boyefio said the actions by the Minority is not promoting democracy in the countryÂ

''Its likely we are going to have more walkouts, maybe not in the form as we have seen but definitely a certain more. because both parties are taking a very entrenched positions on issues. They are not ready to come to the table to have a middle ground and if that position continues then we are likely to see more walkouts.''

''The attitude of the Minority is not helping us in any way. Parliament is all about debate talking giving your views on issues today we saw what happened in the debate we were given one side of the issue so Ghanaians have been denied of the ability of hearing the other side of the issue. That is what we are losing now.''

The NDC MPs walked out on the President last week just before his presentation citing abuse of power, attack on democracy, a compilation of a new votersâ€™ register, targeting of businesses perceived to be affiliated to the party among other reasons.

Prior to today's debate, Majority leader Osei Kyei-Mensah-Bonsu had said the minority could join in the debating the Presidentâ€™s address in spite of their walkout.

However, Political Historian, Professor Nana Essilfie Conduah has called on Members of Parliament to put an end to the use of boycotts to register their displeasure.