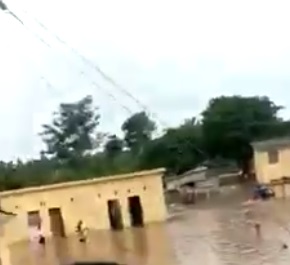 Floodwaters have submerged the Ankaful Prison and some communities in the Central Region.

Some residents in the affected communities including Ankaful Fie, Ntranoa, Amissano, Nkontrodu, Peace and Bethel Avenues have been rendered homeless with others who have no alternative places stuck in their rooms.

Other terribly hit areas include Abee, Simiw and Abrem where the Agona Health Centre has been affected.

Many structures and homes, including those belonging to the Ankaful Prisons, farms, parks among other facilities have all been submerged.

Meanwhile, residents who live in the Twifo Praso section of the Central Region are stranded because a bridge at Jukwa linking Cape Coast to Twifo Praso had caved in.

The incident has affected the road, preventing motorists from crossing.

Reports say the Surowi river which connects Twifo Praso to some adjoining communities had overflowed its bank, forcing the bridge on the main Cape Coast to Twifo Praso road to collapse.