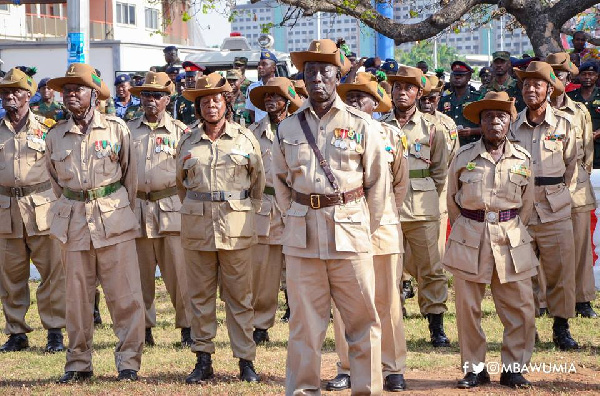 Some veterans at parade
Shares

A wreath-laying ceremony to commemorate the day will be held at the Freedom Monument, Osu, Accra.

The event that precipitated the countryâ€™s struggle for independence, is marked annually in honour of the three ex-servicemen who were killed during a peaceful march to the Christiansborg Castle on February 28, 1948.

The three â€“ Sergeant Adjetey, Corporal Attipoe and Private Odartey Lamptey â€” all members of the then Gold Coast Regiment of the Royal West African Frontier Force, were killed by the colonial police while marching peacefully to the Castle to present a petition to the then Governor, Sir Gerald Creasy.

On the noon of February 28, 1948, a number of ex-servicemen were marching from Accra to the Christiansborg Castle to present a petition to the governor over their unpaid war benefits.

They were, however, intercepted at the crossroads by a contingent of armed policemen.

The contingent, led by British Police Superintendent, Mr Colin Imray, ordered that they disperse and when they refused to obey, he gave an order to the police to open fire; and the three ex-servicemen were killed.

The ex-soldiers had fought alongside the allied forces in the Gold Coast Regiment of the Royal West African Frontier Force during the Second World War and had returned home poor but they were not paid their gratuity.

After several appeals to the colonial government to consider their plight had failed, the ex-servicemen decided that a direct appeal should be made to the British colonial governor of the Gold Coast, hence the march.