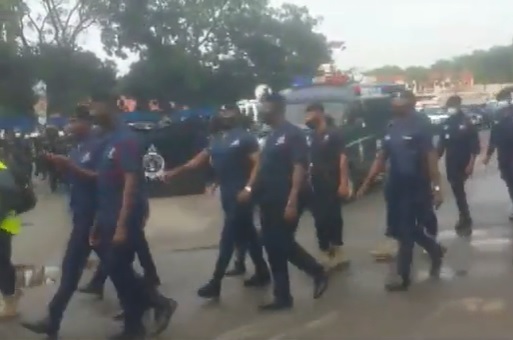 The Ghana Police Service on September 21, 2020, walked through some principal streets of Accra.

The purpose of the march is to build confidence ahead of election 2020.

The personnel moved along with ambulances, trained dogs, crime scene and armoured vehicles which will be tactically deployed for election security come December.

They will then move through Pig Farm,  Kotobabi, Accra New Town, Nima and Kwame Nkrumah Circle.

All this is aimed at assuring citizens that the Service is committed and ready to maintain law and order before, during and after this year’s presidential and parliamentary elections.

The just ended voters registration exercise was charactirized with some chaos, a situation many says could be a red flag ahead of the 2020 elections.

There are strong calls by some Civil Society Groups to beef up our security system ahead of the election.

President Akufo-Addo has assured Ghanaians that he will ensure that the nation delivers peaceful, free and fair general elections on December 7.

He said the election will provide opportunity for the people to make a decision of who governs them in peace, devoid of intimidation and violence, and that he, as the President, was determined to make that possible.

"I am determined to make the necessary arrangements to guarantee the peace, security and stability of our country in the 2020 general election,” the President added.