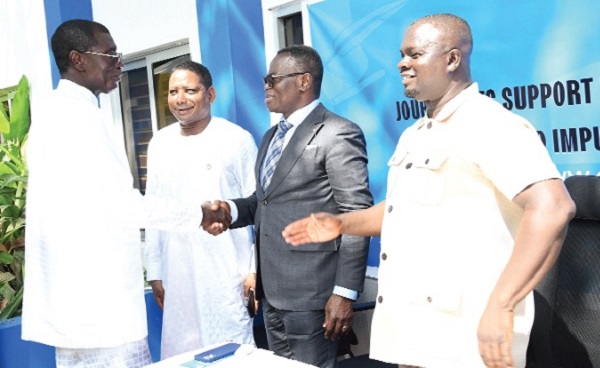 Justice Yonny Kulendi, Supreme Court Judge, in a handshake with Prof. Ato Duncan (left), CEO of COA Mixture Centre, after presenting a cheque for GH¢100,000 towards the Journalists Support Fund during the launch. With them are Abdourahamme Diallo (2nd from left) Representative, UNESCO to Ghana, and Albert Dwumfour (right), President of the GJA. Picture: EBOW HANSON
Shares

The fund among other things is to assist journalists who have been abused to seek redress in court.

Addressing the congregation at the launch on Wednesday, November 2, 2022, the President of GJA, Albert Kwabena Dwumfour indicated that most journalists as a result of the lack of funds refrain from seeking court redress.

As such the need for financial support to boost the confidence in victimize journalists.

"The era when journalists were assaulted but they did not get justice due to lack of funds to pursue legal action will soon become history.

“Lack of urgency, welfare issues, attacks on journalists will no longer exist. This is an era of hope and genuine solidarity with all Ghanaian journalists. We must work without fear or panic," he emphasized.

Additionally, he said, the fund would be used to cushion journalists financially during crises, such as accidents, ill-health, among others, and also support retirees in distress.

Mr Dwumfour noted that attacks on journalists had, over the period, remained a major concern to the association.

“Many journalists have suffered attacks and gone through excruciating pain over the years and the impunity continues unabated.

“What is more worrying is the fact that, invariably, the victims of such crimes do not get justice. Journalism is not a crime and the lives of journalists are important to us.

“We believe that establishing the fund will go a long way towards assisting journalists who are attacked by covering their medical and legal expenses,” the GJA President explained and called for support for the fund.