Gov't needs to compensate us - Residents of Jamestown 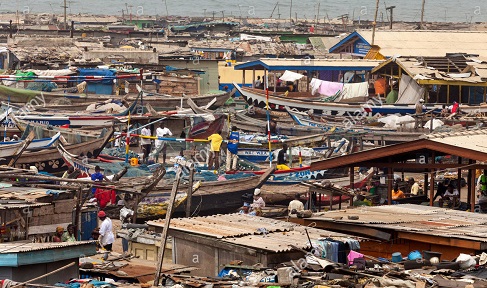 Some residents of Jamestown in Accra whose structures were pulled down today are calling on the government to compensate them.

The Accra Metropolitan Assembly, AMA today pulled down over 400 structures at Jamestown in Accra.

The exercise is to pave way for the construction of the Jamestown fishing harbour.

Sub Metro Chairman of Ashiedu Keteke under the AMA Raymond Tettey said the occupants of these structures were notified to vacate the place but they refused to comply.

In a radio interview, he explained that the contractor for the project is ready to begin and the site needs to be cleared for them.

"The Minister for Transport about a month ago came to hand over the site to them for the commencement of the projects, the contractor is ready and he wants to come to the site. As Assembly, we have to come and clear the site for them to enable them to start their work and we have notified all those living here that the contractor is coming on-site so we want them to vacate so that they can work. But you know people they still have not moved that is why we are clearing the site for the contractor."

READ ALSO : AMA pulls down over 400 structures at Jamestown

But some of the affected residents are demanding compensation from the government.

One of the affected persons who spoke to Citi FM said "The matter is that we have some documents on the land, we are not here just like that and the government should have contacted us and explain to us the situation. In fact, you can see the huge infrastructure we are able to generate from here so the government cannot just come in and destroy us that are helping children. 1,300 children, we have helped already..."

"According to them, they will give back the place to us in three years, this is what the Metro chief told us but the Chinese want to use this place for the residence, they cut sod we saw the plan and it doesn't include us..." another person added.

The Government of Ghana has this month officially handed over the site for the construction of the Jamestown Fishing Harbor to the Chinese engineers and contractors.

A statement by the Ghana Ports and Harbours Authority said the construction is expected to be completed in 32 months.

President Akufo-Addo cut sod on December 5, 2018, for the project which had been on the drawing board since 1965 where he stated that even though many sod-cutting ceremonies have been held by previous governments, he will ensure actual work on the grounds starts for the completion of the harbour.