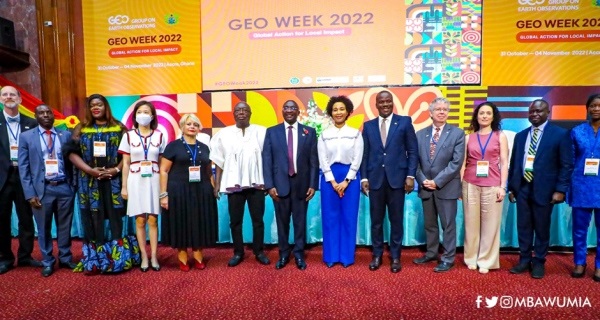 Vice President Dr Mahamudu Bawumia has commended the Group of Earth Observations (GEO), for its continued provision of critical data for policy formulation and implementation in Ghana's ecosystem.

Speaking in Accra at the 18th Plenary of the Group of Earth Observations (GEO) Week on Wednesday, Dr Bawumia said such data had become increasingly important for decision-making and the government's targeted programmes such as poverty reduction and the fight against illegal mining.

The Vice President noted that Ghana had always applied the products of the Digital Earth Africa programme to monitor landscape changes because of illegal mining activities.

"Developing an interoperable data ecosystem that combines Earth observations data with other data, including socioeconomic data, citizen data and statistical data, among others would be more meaningful and impactful," he stated.

Dr Bawumia said Ghana's development priorities were focused on economic transformation through value-addition to create jobs, reduce poverty and enhance social inclusion while sustaining the integrity of its environment.

"Our medium and long-term development plans are underpinned by the 'Ghana Beyond Aid' vision to change the mindsets of our citizens towards an increased reliance on internal resources plus private sector investment to lead economic transformation."

The application of digital technologies, according to Vice President Bawumia, was fundamental to the 'Ghana Beyond Aid' agenda, which emphasises maximising resources, investments in agriculture, improved health and industrialisation, enhancing critical skills and education and promoting renewable energy and energy efficiency.

Dr Bawumia disclosed that the government was in the process of finalizing a new Digital Economy Policy and a Digital Transformation Blueprint to position Ghana as the leader in ICT innovation in Sub-Saharan Africa.

The ongoing Ghana Digital Acceleration Project is expected to increase access to mobile internet and broadband services by encouraging private sector investment in last-mile connectivity in underserved and rural areas, with particular attention to women, persons with disabilities and the youth.

According to Vice President Bawumia, the government was working through bilateral and multilateral partnerships to put in place policies and programmes to boost resource efficiency, establish a circular economy, mitigate and adapt to climate change, mitigate disaster risks and halt biodiversity loss.

"We are also actively pursuing improved ways to harness the power of earth observations to support planning and decision-making in weather forecasting, measuring land-use change (such as deforestation), monitoring coastlines, and monitoring and responding to disasters, including fires, floods, and earthquakes."

While Ghana has made major progress in poverty reduction efforts through increased access to education, agricultural production and rapid urbanization, significant challenges remain, as government need to employ data, tools and systems to address them.

That, Dr Bawumia said, efforts to tackle these challenges would require accurate, global, and timely data and information to support sustainable development in the country.

"Earth observation systems could easily be used to track and in some instances minimize the negative impact of these environmental problems," he maintained."

Vice President Bawumia called for greater collaboration to protect the environment and the entire planet.

He said a such gathering of experts offered Ghana and the rest of Africa, the opportunity to catalyse increased use of earth data, tools, and services to inform the decision for the accelerated climate and sustainable development action.

"This meeting represents the pinnacle of global collaboration for accelerating the use of Earth observations as evidence for local impact, both in Africa and around the world," he added.