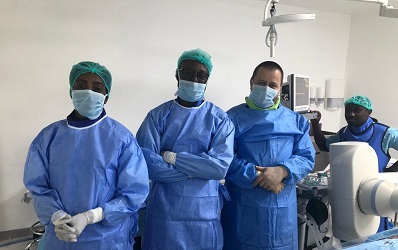 A seven-member team of Ghanaian doctors has performed the first-ever brain surgery in the country, without cutting the skull.

The minimally invasive brain surgery is the technique by which health workers safely remove the brain and skull-base tumors through smaller and more precise openings that minimise collateral damage; that is, injury or other damage inflicted on an unintended target such as blood vessels and nerves.

Technically known as ‘Endovascular brain aneurysm coiling’ (because there is no need to cut into the skull to do the surgery), the technique passes a tube (catheter) through the groin (junctional area between the abdomen and the thigh on either side of the pubic bone) up into the artery containing the brain aneurysm, a process known as endovascular coiling or coil embolisation.

The two-hour surgery was performed with modern equipment and computer software at the Euracare Advanced Diagnostic and Heart Centre, a private health facility in Accra.

An interventional radiologist, Dr. Benjamin Dabo Sarkodie, who is also the Head of Radiology at Euracare, led the team.
The other doctors were from the Stroke Unit of the Korle Bu Teaching Hospital and Euracare.

Supported by a visiting interventional radiologist, Dr. Itsvan Lazar from Hungary, the team performed an emergency minimally invasive surgery in the brain to stop bleeding, a condition medically known as ‘Subarachnoid Hemorrhage’.

That procedure deployed minimises surgical cuts to reduce trauma to the body.

In an interview with the Daily Graphic in Accra nearly three weeks after the successful surgery, Dr. Sarkodie said the patient, who suffered a condition known as a ruptured brain aneurysm, had been discharged days earlier and was currently recuperating.

The condition, which is fatal, affects men and women of all ages.

What is brain aneurysm?

Brain aneurysm, also known as a cerebral aneurysm, is a weak spot in the wall of a blood vessel inside the brain. It is a bulging, weakened area in the wall of an artery in the brain, resulting in an abnormal widening, ballooning or blistering.

That area of the blood vessel gets worn out from the constant flow of blood and bulges out, almost like a bubble.

Dr. Sarkodie explained that because there was a weakened spot in the aneurysmal wall, there was the risk of a sudden burst (rupture) of the aneurysm, a life-threatening situation.

He said the condition could lead to reduced blood flow to the brain, too much spinal fluid in the brain, coma, permanent brain damage and death.

Most cases of the condition (about 90 per cent), he said, presented without any symptoms, as the blood vessels that caused it was very small in size (less than 10 millimeters or less than four-tenths of an inch in diameter), adding that smaller aneurysms might have a lower risk of rupture (sudden burst).

The team performed an endovascular coiling or coil embolisation, which meant that there was no need to cut into the skull to do the surgery.

Rather, a catheter was advanced from a blood vessel in the groin up into the blood vessels in the brain, and fluoroscopy, that is, a live X-ray, was used to assist in advancing the catheter into the head and the weakened area.

Once the catheter was in place, very tiny platinum coils were advanced through it into the aneurysm.

The tiny, soft, platinum coils, which are visible on X-ray, conform to the shape of the aneurysm.

Dr Sarkodie said although a cerebral aneurysm might be present without symptoms, the most common initial symptom was a sudden headache from a subarachnoid hemorrhage (SAH), which is a life-threatening type of stroke caused by bleeding into the space surrounding the brain.

He explained that a severe sudden headache associated with SAH was a medical emergency.

The interventional radiologist mentioned the symptoms of an unruptured cerebral aneurysm to include headaches (rare, if unruptured), eye pain, vision deficits, and eye movement deficits.

He said currently the cause of cerebral aneurysm was not clearly understood, but he was emphatic that it was associated with many factors, including smoking, hypertension and family history; that is, genetic.

He said the ultimate cause of a brain aneurysm was an abnormal degenerative change in the wall of an artery and the effects of pressure from the pulsations of blood being pumped forward through the arteries in the brain.

Dr. Sarkodie mentioned some risk factors associated with aneurysm formation to include advancing age, alcohol consumption (especially binge drinking), atherosclerosis, that is, a disease of the arteries characterised by the deposition of fatty materials such as cholesterol, cellular waste products, calcium and fibrin on the inner walls.

Others, he said, were cigarette smoking, the use of illicit drugs such as cocaine or amphetamine, hypertension (high blood pressure) and trauma or injury to the head.

He, however, emphasised that although those risk factors increased a person's risk, they did not necessarily cause the disease.

He said some people with one or more risk factors never developed the disease, while others who developed it had no known risk factors.

He advised that “knowing your risk factors to any disease can help guide you into the appropriate actions, including changing behaviours and being clinically monitored for the disease”.

Dr. Sarkodie said cerebral aneurysm was often discovered after it had ruptured or by chance during diagnostic examinations, such as computed tomography (CT) scan, magnetic resonance imaging (MRI) or angiography that was being done for other reasons.

He said in addition to a complete medical history and physical examination, diagnostic procedures for cerebral aneurysm might include digital subtraction angiography (DSA); that is, a fluoroscopy technique used in interventional radiology to clearly visualise blood vessels in a bony or dense soft tissue environment.