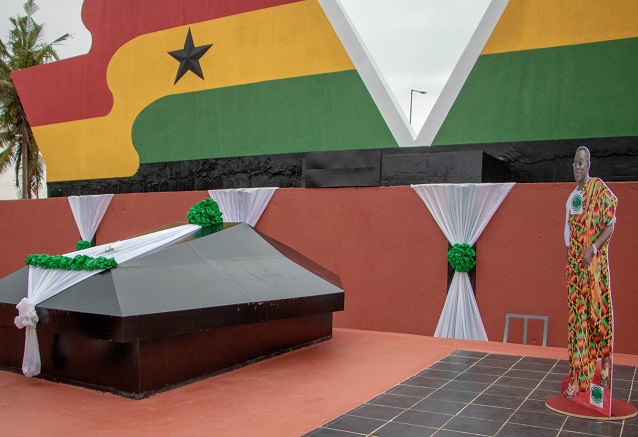 The Founder and Chief Executive Officer (CEO) of the Atta-Mills Institute, Koku Anyidoho has thanked President Akufo-Addo for his decision to renovate the Asomdwe Park.

Today marks 8 years since he passed and there was a wreath-laying ceremony at the park.

The park has been in disarray but the Coastal Development Authority today cut sod for the renovation of the park.

Mr Anyidoho on July 24, 2020, at the event, lauded and thanked President Akufo-Addo for the gesture.

"Prof Mills I told you I will do this and it is being done. We thank the President of Ghana, Akufo-Addo, he is doing this not for his own sake but he is doing it so that God's name will be glorified. This country is too divided along political lines, you wanted to change that you didn't finish but I will continue"

According to him, many, have misconstrued his nickname â€˜The Bullâ€™ to mean he is an uncouth and loud person, who can be used for their own selfish purposes but that is far from the truth.

He noted that in his position as the Head of Communications at the Presidency during the tenure of the late President Atta-Mills, he was approached by someone from the party to attack former President Rawlings verbally.

Koku noted that because of the father and son relationship he had with the late president, he informed him about the incident and this is the advice he received. â€œWhen I went to the president and told him so and so person says I should go after Rawlings, the President exclaimed, herh!! Koku, sit down. And he said, Koku, never, never, never insult Rawlings in your life.â€

Â John Evans Fiifi Atta Mills served as President of Ghana from 2009 to 2012.

Previously he was Vice-President from 1997 to 2001 under President Jerry Rawlings, and he stood unsuccessfully in the 2000 and 2004 presidential elections as the candidate of the National Democratic Congress (NDC).