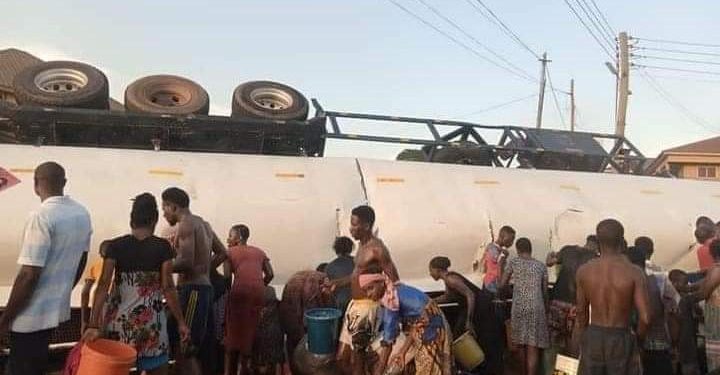 Some residents of Kaase in Kumasi in the Ashanti Region, on Sunday afternoon attempted to siphon fuel from a fuel tanker that had overturned regardless of the danger it posed to them.

People were seen running towards the tanker with their buckets in hand to fetch the fuel.

Fire Service personnel who were informed of the incident around 5:00 pm, got to the scene and dispersed the crowd, before they started a process to offload the fuel into another truck to avert any unfortunate incident.

According to the Ashanti Regional Public Relations Officer of the Ghana National Fire Service, DO3 Peter Addai, some residents actually succeeded in syphoning some of the fuel.

He said the Fire Service had a tough a time stopping them as some residents were still bent on siphoning the fuel, forcing them to call in the police.
The fuel tanker was on its way to the BOST Ashanti Regional Depot at Kaase when the incident occurred not very far from its destination.

There’s no information yet as to whether any casualty was recorded during the process.

Although this is not the first time some Ghanaians have sought to take advantage of a vehicle carrying goods that has been involved in an accident, this is one of the few times it involved a vehicle carrying fuel that could have exploded and put lives at risk.