Let's preserve our culture and heritage for the unborn generations – Bawumia 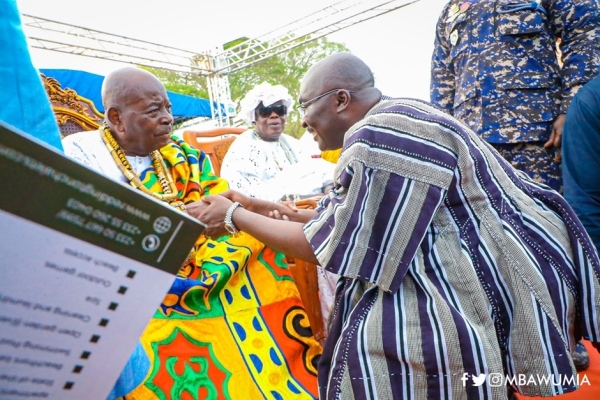 The Vice President, Dr. Mahamudu Bawumia, has called for the preservation of Ghanaian culture and heritage as a legacy to unborn generations.

Speaking in Anlo on Saturday at the 2022 Hogbetsotso Festival, which happened to be the 60th Anniversary of the festival, Dr. Bawumia umderscored the need for cultural sustainability, explaining that it is about "maintaining cultural beliefs, cultural practices, heritage conservation, culture as its own entity, and the question of whether or not any given culture will exist in the future."

Stressing on the immense contributions of culture to economic development, especially through tourism, Dr. Bawumia commended the Chiefs and people of Anlo state, for preserving the Hogbetsotso, which he said continues to attract visitors to the area, for several years.

"This festival has not been celebrated ever since the break out of the deadly Covid-19 pandemic, which brought many countries, businesses and organisations to their knees. Thanks to the good interventions and measures instituted by the His Royal Majesty, Torgbi Sri III and the good people of Anlo, this festival has once again seen the light of day," Dr. Bawumia said.

"The Anlo State, over the past 60 years, has strived and contributed in many ways towards the Development of our dear nation Ghana.  So, as we celebrate the 60th Annual Hogbetsotso Festival today, we must look back even as we take stock of our achievements and challenges over the years and re-strategise on how we can further accelerate the development of the Anlo State and Ghana at large," Dr. Bawumia said.

"From their rich cultural heritage to cultural and creative industries, culture is both an enabler and driver of the economic, social, and environmental dimensions of sustainable development of our people."

"The people of Anlo have come this far with their unique culture and tradition and preserving such culture and heritage will be a legacy for the future and unborn generations".

"A common knowledge is that Anlo Traditional Area, especially Anloga and Keta is one of the growing, well patronized and highly competitive tourist destinations in Ghana and beyond. Aside the enormous tourism potentials of the districts, which draw hundreds of tourists here every week and several thousand every year, it is naturally, a peaceful area to sit and relax."

The presence of the Asantehene in Anlo was even more historic, as his visit was the first time in over 120 years that any Asantehene has visited the Volta Region.