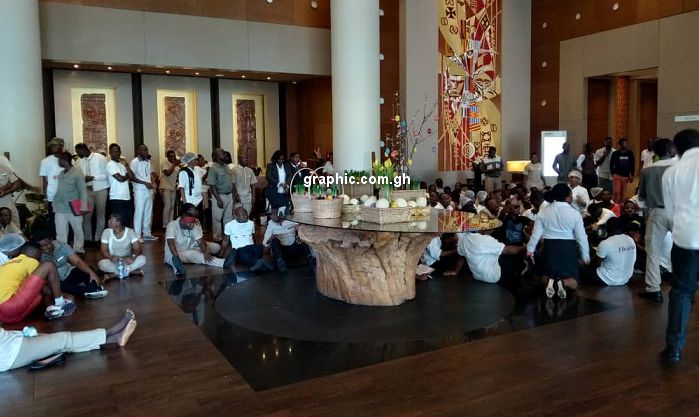 The staff of theMövenpick Ambassador Hotel in Accra have laid down their tools in protest of what they describe as racist treatment meted out to them by the management of the hotel.

According to them, unfair treatment has persisted since 2011.

The staff, numbering about a hundred, who pitched camp at the reception of the hotel amidst drumming and war songs on Wednesday afternoon, say they will not return to their post until the General Manager of the hotel Michael Rathgeb - who they accuse of overseeing the racist treatment is dismissed.

Some guests at the hotel who have been abandoned with no staff to assist them have joined the media to witness the demonstration.

Some staff who spoke to Graphic Online alleged that Ghanaian workers were treated harshly and dismissed by the hotel when they committed misdemeanors such as stealing pens while expatriate staff were let off the hook when they stole from guests.

They also alleged that a female expatriate staff who stole gold bars from a guest remains an employee of the hotel even after she was arrested by police.

The Movenpick General Manager, Mr. Rathgeb who was standing at the entrance of the hotel, declined to comment when Graphic Online's Kweku Zurek approached him. 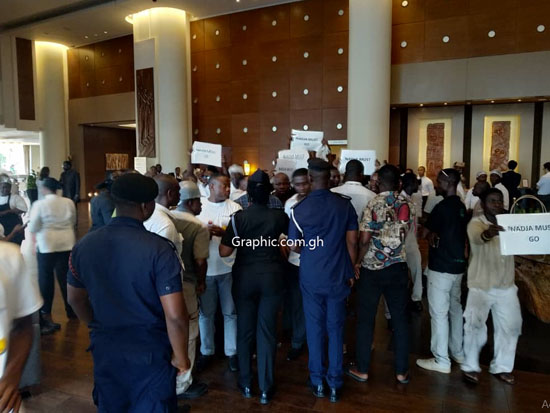