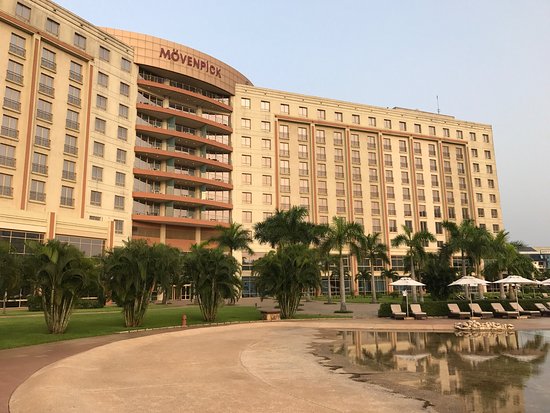 Some staff of the Mövenpick Ambassador Hotel in Accra who laid down their tools last Wednesday, April 17, 2019, in protest over what they described as racial discrimination against them by the management of the hotel says they would embark on another strike if their grievances are not resolved by the close of today.

The staff had accused the management of the hotel of repeatedly treating them unfairly compared to their co-workers who are expatriates when the punishment for wrongdoing in the company was being meted out.

They also mentioned the unequal salary structure and conditions of service between them and expatriate workers as some of the issues that gave proof of discrimination against them. The workers had demanded equal treatment as was being extended the expatriates and the immediate removal of the hotel’s General Manager, Mr. Michael Rathgeb, who they accused of being a champion of the discriminatory acts.

They had also demanded the immediate dismissal and prosecution of an expatriate worker at the hotel (name withheld), who was allegedly involved in a reported gold scandal that rocked the hotel recently.

Some workers told the Daily Graphic last Wednesday during the original protest that when news broke that the said worker had a hand in the eight bars of gold that went missing at the hotel, a committee was set up to investigate the matter. They alleged that their checks had revealed that the committee had confirmed the accusation against the said expatriate and had recommended dismissal, even though it was yet to make its findings public “after completing its work weeks ago”.

They described the situation as unfair given that some of their colleagues who had “pilfered items such as pens, towels and eggs” were dismissed summarily and prosecuted without delay. After almost four hours of continuous protest last Wednesday, the workers returned to their posts after receiving assurances from Mr Rathgeb that their grievances would be addressed within 24 hours (which ended at 1 p.m. on Thursday, April 18, 2019).

According to some of the workers who took part in the protest, a meeting held last Thursday ended with the management of the hotel failing to address the concerns that underpinned the protest.

They said management members explained that per the hotel’s policy, it could not implement sanctions against the expatriate worker until a period of one-month (starting from when the committee commenced its investigations) had elapsed.

The workers said even though they disagreed with the decision, they accepted it because the stipulated period would be due today.“If they fail to dismiss and prosecute the expatriate worker by close of today, we will be forced to lay down our tools again in protest and later petition the Presidency on the racial abuses going on at the hotel,” one of the workers said.

In an interview with the Deputy General Secretary in Charge of Operations with the Industrial and Commercial Workers Union (ICU), Mr. Morgan Ayawine, he said the union had sighted the investigative committee’s report and found its recommendations lenient.

He said the committee had confirmed the incident of missing gold bars and had recommended, among others, that the expatriate worker be dismissed, but he described the directive as soft, given that the offence committed “is a serious one that merits prosecution.”

He said officials of the ICU held a closed-door meeting with the management of the hotel last Thursday during which the management promised to sanction the affected expatriate latest by Friday (April 26, 2019). Mr. Ayawine, therefore, advised the workers to desist from taking any action before Friday, adding that the ICU would not support any action in that regard.