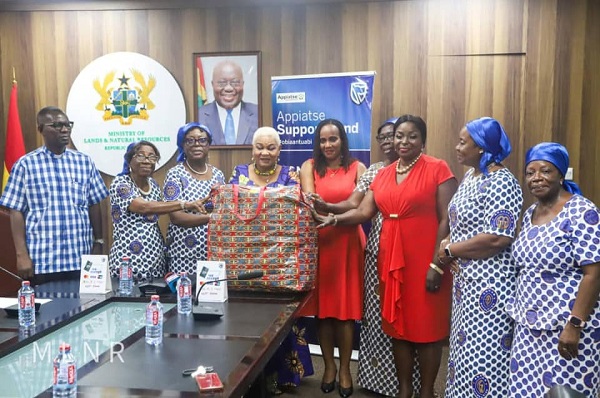 The Mother's Union of the Anglican Diocese of Accra has on Wednesday, October 5, 2022 donated assorted food and clothing items worth GHC15,000 to the Appiatse Support Fund to be further transported to the people of Appiatse.

Speaking on behalf of Union, Mrs. Wilhelmina Graves, the Accra Diocese Secretary, gave a brief background of the Union, saying that one objective of the Union is to help those whose family lives have been met with adversities.

She maintained that it is in light of this objective that they have organised some items including assorted soaps and detergents, Gents and Ladies clothes, Toiletries, cooking utensils among others to support the victims even as they bounce back from the tragedy.

The Chairman of the Appiatse Support Fund, Rev. Dr. Joyce Aryee in her submission informed the donor team that government through the Appiatse Reconstruction Implementation Team have begun the first phase of the reconstruction project.

She continued that through constant consultation and interaction with the people, all those who lost their houses will have them replaced as it was without any social displacement, adding that there will even be a major improvement in their way of life as they will be furnished with a Mordern market, clinic, community centre and other social amenities.

The Chairman appreciated the gesture by the Anglican Mother's Union saying "so far you are the first church fellowship who have mobilized yourself to donate to the people of Appiatse and obviously you have really thought of their very needs with your donation and we are grateful."

She hoped that their gesture of love will motivate other church fellowships to mobilize the little they can and donate to support Government and the Ministry in their quest to restore the livelihoods of the people of Appiatse.

Rev. Joyce Aryee also submitted to the Anglican church through the Union to seize the opportunity and make their presence felt in the Appiatse community by starting up a church even as their livelihoods are being restored.

Mrs. Antoinette Tsiboe-Darko, a member of the Committee also expressed a heartfelt appreciation to the Union members for their time and efforts in mobilizing items from members across the country to donate to the Appiatse victims.

She stressed that, "the work of the Committee is not only to mobilize funds but to help restore livelihoods so we see these items as very significant things that would help them to realise that people truly do care about them".