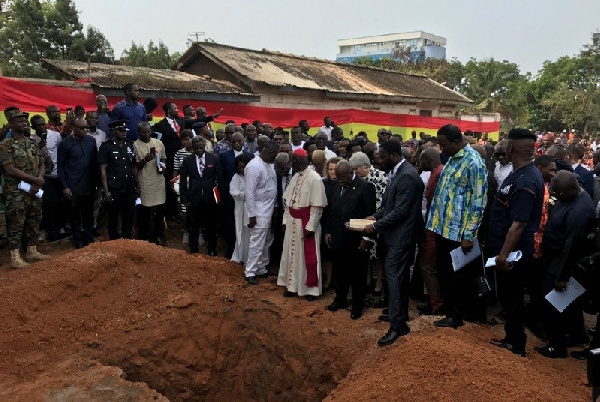 President Akufo-Addo, says the building of the National Cathedral is a necessity because of God's favour on the nation.

The President addressing attendees of a ceremony at the construction site of the Cathedral to lay the foundation stone for the commencement of construction works said there have been crisis like wars, famine among others that have hit neighbouring countries over the years, but God's favour on the nation has made it possible for us to stay strong.

â€œSince gaining our freedom from the colonial power sixty-three years ago on the 6th of March 1957, Ghana has so far been speared civil war, famine, and epidemicsâ€.

â€œWe are certainly no better than the other nations in our neighborhood who have been confronted with these challenges. I believe it is by the grace of God that we have been preserved and sustained. The construction of the Cathedral will be an act of thanksgiving to the Almighty for His Blessings, Grace, Favour and Mercies on our nationâ€ President Akufo-Addo said.

Lastly, President Akufo-Addo noted that he made a pledge to Almighty God that if He was gracious enough to him to make him President, he will help build a Cathedral to His Glory and Honour.

â€œI am determined to redeem this pledgeâ€ President Akufo-Addo stated.

After his address, President Akufo-Addo led a host of Eminent members of the Clergy in Ghana to lay the foundation stone which was imported from the Israeli capital of Jerusalem, the Holy Land, at the exact spot where the altar of the Cathedral will be situated when the building is complete.

President Akufo-Addo said â€œseventy-one percent of the Ghanaian people adhere to the Christian religion grouped under the various persuasions of the Christian Faith. The interdenominational National Cathedral will help unify the Christian community and thereby help promote national unity and social coercionâ€.