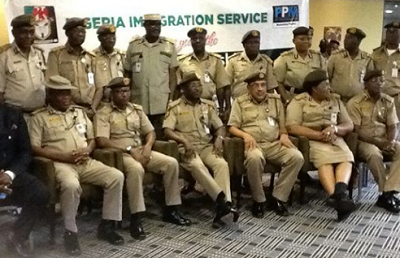 The Federal Government has announced the deportation of four Ghanaian nationals for what it attributed to their violation of some immigration rules.

This was disclosed in a statement issued by the Public Relations Unit of the Nigeria Immigration Service NIS, Friday in Abuja.

The statement reads: “The Nigeria Immigration Service has carried out a Deportation Order as authorised by the Honourable Minister of Interior in respect of four Ghanaian Nationals for violating various provisions of the Immigration Act and Regulations.

“This is in line with the powers vested on the Honourable Minister of Interior in Section 45(1) and (2) of the Immigration Act 2015. “The Order which was issued in the interest of the Public affects three males and a female. They are, Florence Donkur, Simon Gyan, Yeboah Collins, and Alhaji Isa.

“They were deported to their country of origin via Nnamdi Azikiwe International Airport, Abuja today 22nd March 2019 by 0900 hrs.

“The Controller General of Immigration, Muhammad Babandede, uses this medium to reaffirm the commitment of the Service to enforce relevant laws whenever the need arises while encouraging regular migrants in the country to be law abiding”.