No cash or cheques lost after inferno - GRA quashes rumours 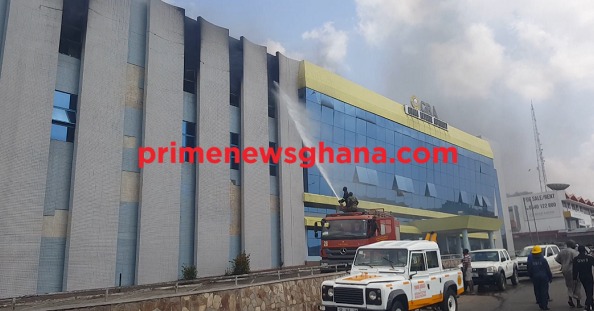 The Ghana Revenue Authority (GRA) has brushed off rumors that some huge amount of money was lost after the fire engulfed its head office annex near the Kwame Nkrumah Interchange.

The fire is said to have started around 8 am and Fire Service personnel had to battle with it for hours.

In a statement released by GRA, the Acting Commissioner Amishadai Owusu Amoah assured Ghanaians no cash got burnt during an inferno that gutted the headquarters annex.

Reports circulated that they have lost huge sums of cash and data but they have quashed those reports.

Portions of the statement read: "Data is safe and no loss of cash or cheques have been recorded after a fire outbreak at VAT House, a sub station of the Ghana Revenue Authority at Kwame Nkrumah Circle in Accra, caused extensive structural damage to its ICT center, official sources have said."

Firefighters spent more than 6 hours to fighting the fire that has completely ravaged the second floor of the building.

Data is safe and no loss of cash or cheques have been recorded after a fire outbreak at VAT House, a sub station of the Ghana Revenue Authority at Kwame Nkrumah Circle in Accra, caused extensive structural damage to its ICT center, official sources have said.

Formal assessment of the extent of damage is set to begin after a fire outbreak at VAT House, the Accra Kwame Nkrumah Circle sub station of the Ghana Revenue Authority (GRA), was brought under control on Sunday, 1 December.

Officials have assured the media that GRA’s existing systems backup does not only ensure the recovery of files but also business continuity. “In essence, our core data is safe, as all GRA files are automatically backed up at an offsite data center” said Mr. Ammishaddai Owusu-Amoah, Acting Commissioner for Domestic Tax Revenue Division.

Aside from a visible structural damage to the GRA Circle branch building, official report from the Fire Brigade on Sunday afternoon indicated that no casualty had been recorded. The fire is estimated to have started at around 4 am on Sunday.

In the meantime, GRA commissioner and Board Chair, Mr. Ammishaddai Owusu-Amoah, and Professor Stephen Adei, respectively, have debunked, as “fake news”, reports of the loss of cash and/or cheques in the fire, following what they noted was a “mischievous attempt to undermine confidence in an already complex process of dealing with the situation”.

The fire brigade has begun investigations to determine the real cause of the GRA Circle branch fire, and GRA officials have pleaded with the public and the media to verify information related to the incident from official sources.