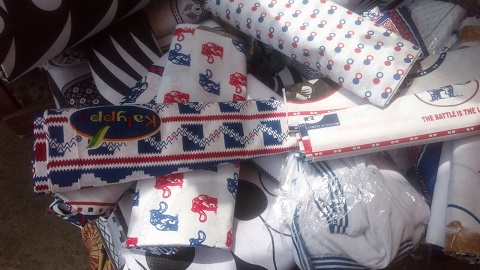 New clothes to celebrate the electoral victory of President-Elect Nana Addo Dankwa Akufo-Addo and his inauguration on Saturday; January 7, at the Blackstar Square in Accra have hit the market.

The clothes, including the inauguration cloth-Nyame Adi Ama Yen, Kalypo, Onaapo, Nana Aba and the battle is the Lord’s are selling very fast.

Akosombo Textile Limited (ATL), one of Ghana's indigenous textile companies was contracted to print the clothes.

Samuel Hemans-Ardey, the Deputy Marketing Manager, ATL, told the Ghana News Agency (GNA) in Accra on Friday that ATL designed and printed four clothes, two for the public while the remaining two were ordered by the New Patriotic Party (NPP) executives.

Madam Mary Ansongmaa, a trader who sells the clothes at Makola in Accra told the GNA that for the past two weeks, people have been buying the products more than any other cloth.

Another trader who introduced herself as Madam Gyamfua said the Onaapo and Nana Aba goes for GHS20 per yard while the Kalyppo goes for GHS25 per yard.

Apart from these clothes other NPP paraphernalia are in high demand. They include; hats, necklace, watches, wristbands, earrings, scarves and spectacles. (via: GNA).