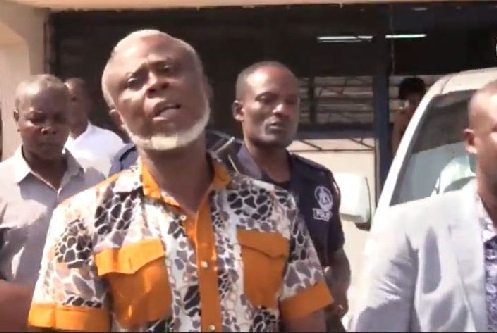 Dr Frederick MacPalm, who is the main suspect in the alleged coup plot, says they planned on staging a demonstration and not a coup as they are being accused off.

He said his intentions were just to organized like-minded people to stage a demonstration due to dissatisfaction with issues in the country.

He was in court on Tuesday and took the offer from the District Court to speak for the first time after the state prosecutors had asked that he should be committed to stand trial at the High Court.

â€œWe saw what went on and thought there was some political twist. We started gathering information, video clips from various journalist to put together to stage a demonstration because we thought what was going on in this country was detrimental to the lives of the people. This was the basis of our demonstrationâ€.

He proceeds to state this was why he recruited people like ACP Agordzo and it had nothing to do with any coup plot.

â€œThatâ€™s how I galvanized people like ACP Agordzo and a few others on my Whatsapp platform. I emphasize that we never and ever discussed anything like coup dâ€™etat.

â€œI believe, the organization TAG from its aims and objectives put fear into the powers that be so they turned around to cripple my organization and charging me with these crimes. It is based on falsehood, preposterous and I deny them absolutelyâ€

Senior State Attorney Hilda Craig says some persons accused of plotting to overthrow government held discussions on whether or not to kill President Akufo-Addo once their plot is successful.

She further alleged that â€˜the killing of the Presidentâ€™ discussion, however, had the option of being abandoned once the President agreed to announce that his government had been toppled.

This includes the Vice President, Speaker of Parliament and the Chief of Defence Staff.