Planting for Food and Jobs : Director arrested over missing fertilizer at Asunafo North 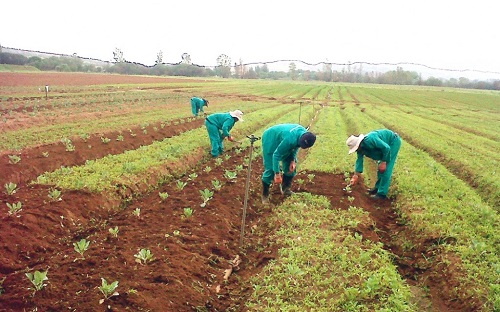 Police at Goaso in the Ahafo Region have arrested the Asunafo North Municipal Director of the Ministry of Food and Agriculture (MOFA), Eric O. Aduamah over missing 14,497 bags of fertilizer meant for farmers under the Planting for Food and Jobs (PFJ) programme.

The Ministry of Food and Agriculture had embarked on special auditing of the Planting for Food and Jobs fertilizer supplied to the various districts, Municipal and Regional offices of MOFA in the northern part of the country.

Following the successful exercise in Upper East, Upper West, Northern Regions, the exercise has been extended to regions such as Bono, Bono East, Ahafo and Ashanti.

In the Asunafo North Municipality, Mr. Eric O. Aduamah allegedly could not account or produce names of beneficiary farmers who were given 7400 NPK and 7097 bags of Uriar fertilizer amounting to GH¢946,000 government supplied to the Asunafo North office of MOFA in 2017/2018 crop season.

The Head of the Special Audit on planting for Food and Jobs, Baffour Amo Kofi II, subsequently reported the case to Goaso Divisional Criminal Investigation Department (CID) for his arrest for further investigations.

The Goaso Divisional Crime Officer, Florence Sackey Clark confirmed the arrest but declined to give details.

Two articulated trucks, each loaded with 2,000 bags of NPK fertilizer meant for the government’s flagship programme, Planting for Food and Jobs (PFJs) have been impounded by the security agencies at the Paga border in the Upper East Region.

The trucks, with registration numbers AS 1300 V and GT 3181 J, were impounded by the security agencies on Sunday June 9, 2019 when they were attempting to cross the border into Burkina Faso.

The police in Bolgatanga have detained the drivers while the trucks loaded with the fertilizers have been taken to the residency of the Regional Coordinating Council at Bolgatanga pending further investigations.

Briefing the media at Bolgatanga on Monday, the Upper East Regional Minister, Madam Paulina Abayage pointed out that the in-voice accompanying the items indicated that the fertilizer was supposed to be transported to Navrongo and not Paga.

She said before one could legally transport the branded fertilizer to a particular region or district, certain certifications, including endorsement by the Regional Minister, the Regional and District Directors of the Department of Agriculture must be followed.

However, she noted that, the drivers did not possess any of the aforementioned documents. As part of measures to curb smuggling this year, the Regional Minister stated that government had branded the fertilizers with the policy name ‘PFJ’ and the logo. Madam Abayage further explained that the 50kilograms bag of fertilizers were used for the Southern farmers while the 25kilograms was used for farmers for the Northern part of the country.