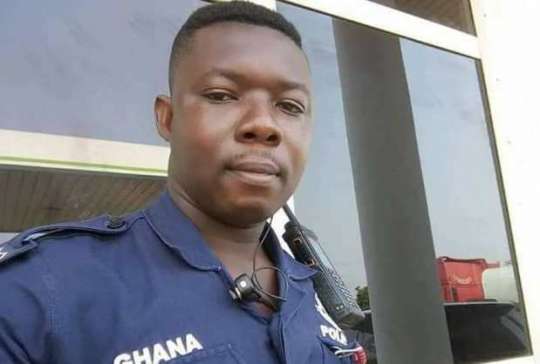 The interdiction of Lance Corporal Frederick Amanor Godzi, the policeman who allegedly assaulted a customer of Midland Savings and Loans Limited(Shiashie branch), will be lifted by the police administration today January 31 2019.

According to the police, the action followed Mr Godzi’s discharge by a court in December last year due to the lack of interest in the trial by the victim(Ms Patience Osafo).

Mr Godzi was charged with assault for allegedly beating Ms Osafo, a customer of Midland, on its premises when she went there on July 19, 2018, to withdraw her money.

Again, all four accused persons in connection with the case were discharged by the court, presided over by Ms Cecilia Dapaah Mireku, in December 2018.

The court discharged them due to the lack of interest in the trial by Ms Osafo.

She is said to have failed to appear before the court to testify and also failed to avail herself to help the police with investigations.

She was reported to have failed to avail herself to testify in the case on many occasions, leading to the decision by the court, in December 2018, to discharge L/Corporal Godzi, for want of prosecution.

Three officials of Midland Savings and Loans, Jocelyn Kukua-Fakah, the Operations Manager; Shirley Portia Anaman, Customer Service Officer, and Prince Ayensu, a driver, who were charged with aiding Godzi to assault Ms Osafo were discharged by the court.

The accused persons had been charged with assault and abetment of assault and pleaded not guilty.

Meanwhile, Ms Osafo has petitioned the Attorney-General over Godzi’s discharge for want of prosecution.

She also wants the prosecutor in the case investigated for possible collusion with the discharged policeman to escape justice.

A petition signed by Mr Samson Lardy Anyenini, counsel for Ms Osafo and dated January 29, 2019, said she was “appalled and distraught” by news reports that Godzi had been discharged for want of prosecution “and wishes to state unequivocally that the court was misled by untruths that she was disinterested and non-cooperative”.