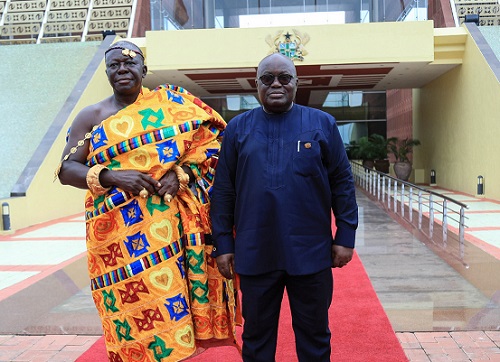 President Akufo-Addo will be the special guest of honour on Akwasidae kese on April 21, 2019, which is the main event of the anniversary.

He will be joined by dignitaries such as the Speaker of Parliament, Professor Aaron Mike Oquaye, the Chief Justice, Justice Sophia A. B. Akuffo, and world leaders to celebrate the Ashantehene since he ascended to the Golden Stool.

Mr. Kofi Badu who is the Chief of Staff of the Asantehene disclosed this in a press briefing at the Manhyia Palace in Kumasi on Sunday, March 24, 2019.

Activities for the anniversary

The President is also expected to organise a state dinner for Otumfuo on April 26, to commemorate the exact date he was enthroned.

activities for the celebration begin on Wednesday with the performance of Atano rites by Otumfuo and the Atano priest and ends on May 12, 2019, with a golf tournament.

A football match between two teams yet to be named and the date for kickoff has been factored into the packed programme.

Key among activities for the celebration is the unveiling of Otumfuo's statue and the sod-cutting ceremony for the second phase of the Central Market redevelopment project at Kejetia on May 2.

Also on the bill is a thanksgiving service for the Asantehene on May 6 to mark his 69th birthday.

There will also be a meeting with the Ashanti professional executives as well as an Asanteman development summit and banquet.

As a sign of respect to Otumfuo, the planning committee has placed a ban on funerals from April 8 to April 30 this year.